This week, we proudly present to you ... Episode IV: A New Poll Question. But first:

Following a 6-3 homestand, and with the pitching staff showing signs of life for the first time in weeks, the nullacct ManagerometerTM ticks up a notch: 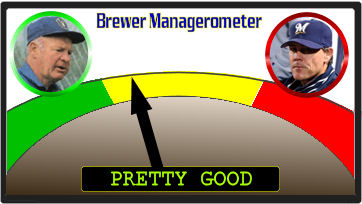 After the jump, a smorgasbord of fun and frivolity. And @notkenmacha, too.

This Week in Stand By Your Man: For the first time that I can remember, Brewers manager Ken Macha went Category 5 Hurricane Ken on an umpire: during Wednesday's matinee against the hapless Houston Astros, Ken bolted from the dugout to protest a hideous miscarriage of justice by third-base mole umpire Brian Gorman* -- not once but twice. K-Mach kicked a little dirt, he pulled out the Jesus at the Last Supper Big Arms, and he made his displeasure known. For Macha, this qualified as going ape****.

Of course, the timing of the twin tantrums was a bit curious, coming, as they did, a day after Macha abandoned Prince Fielder during Fielder's dispute with Bad Gorman after a couple of preposterous strike calls. After getting rung up on two curve balls that were a good foot-and-a-half off the plate, Fielder barked at Bad Gorman ... and then barked a little more ... and then barked a little more still, but Macha was nowhere to be seen. In those situations, at the very least, you'll typically see the manager rush out and usher his player away from the confrontation. Macha let Fielder twist in the wind, and, after the fact, Prince didn't seem too happy about that, shooting Macha an angry look that was last seen 'round these parts before Prince whooped the hell out of Manny Parra back in aught-eight.

Could it be that someone -- player, coach, member of highly-influential fan-run Brewer blog -- took advantage of Macha's open door policy to suggest that, the next time one of his players went nose-to-nose with an umpire, the skipper might be well served to intervene?

* For ease of reference, because we've already got a Gorman here at BCB, Brian Gorman will henceforth be known as "Bad Gorman."

This Week in A New Poll: It's become exceedingly clear that our weekly poll on whether y'all think that Ken Macha will be fired before the next installment of MACHAWATCH! is kind of pointless. At this point, unless something goes Hindenburg-level wrong in the next couple of weeks, there's no reason to think that Macha will be gassed before the All-Star Break.

Thus, we're going to change the poll question this week. With a big tip o' the cap to FtJ, here's your new question to ponder:

Which person will be with the Brewers organization longer -- Ken Macha, or Prince Fielder?

This Week in @notkenmacha: The starting staff is running at capacity right now, but Doug Davis is almost ready to return and a hard decision** is going to have to be made in the next few days. How does our (fake) skipper feel about the situation?

Thanks for your question!

I have been getting inundated with questions about our pitching rotation, and what the Brewers are going to do to improve their place in the standings. It seems to me that some of these nancy-boy fans need to extract their panties from their lady parts and come to the realization that as long as I am managing this team everything is going to work out fine.

That said, I thought I would take a few moments and give you a current breakdown of our starters and how I see them fitting in our 5 man rotation for the rest of the year.

Yo Gallardo. Yo has 8 wins and and an ERA around 2.50, so clearly he is a very good pitcher, but there are three things that I can't look past. First, he has a 10.80 ERA this season against the Cardinals. Secondly, batters are batting 1.000 off of him when he is 3-0 in the count. Most concerning to me though, is that Yo will not allow us to legally change his name to Yo-Yo Gallardo. The other day, the guy with the glasses and the weird nose that owns the Brewers came into my office to ask me if I had any marketing ideas to help raise money for the team. The first thought I had, was to have the team sell brushes door to door -- but apparently people haven't bought their brushes from salesmen for some time now. So then, my mind drifted back to the early '50's when I played summer ball in the Bolivar League in Venezuela.

Back in the '50's we had an utility infielder named Claude Jenkins. Claude was a light-hitting, good-glove guy from Alabama, that could play all seven infield positions. As the concession sales in cocaine were dwindling, the team was starting to fall into tough times financially. One day while we were helping clean out the team's large import/export boat returning from Miami, we happened to notice over 200 crates of yo-yo's. Claude was very excited, as it turned out he attended the UofA on a full-ride yo-yo performance scholarship. My ingenuity took over, and I told Claude that he needed to change his name to Yo-Yo Davalillo, and then we could sell the yo-yo's to the cocaine-gorged youngsters to help raise funds for the team. The promotion was a big success, and we saved the team from financial ruin. Yo-Yo actually made it to the big leagues a few years later, but unfortunately he was extradited back to Venezuela shortly thereafter, as he was imprisoned for spear-heading a yo-yo armed revolution hell-bent on returning Venezuela back to Hungarian rule.

Our next problematic pitcher is Manny Parra. I have a hard time dealing with this cat. The other day before Manny's last start, Todd Coffey and Ed Sedar told Manny that Rick Peterson wanted to talk to Manny on the internets about a webinar dealing with mental toughness. Turns out that they made Manny watch some video on the Youtube about some girls and a cup. I found Manny in the fetal position in the shower 15 minutes before he was supposed to start. I haven't looked at Manny's stats, or even watched him pitch this year, but I do know that his splits are pretty bad in games where Coffey and Sedar make him watch the Youtube before he pitches.

The fifth guy we have to fit somewhere into our rotation is Jeff Suppan. I hadn't seen Soup in some time, and I was wondering where he was hiding at, but I actually ran into him at the park today. Apparently he has pitched well for us in his last couple of starts. I was most pleased to learn about this. This will be a good problem to have if he keeps on improving.

Ultimately though, if the front office wants better pitching results they should leave me alone to do my job ... and fire Rick Peterson.

Well Rocky, I hope this helps you out on your science report,