Hey, remember the last MACHAWATCH!, when some short-sighted fool said this:

It's become exceedingly clear that our weekly poll on whether y'all think that Ken Macha will be fired before the next installment of MACHAWATCH! is kind of pointless. At this point, unless something goes Hindenburg-level wrong in the next couple of weeks, there's no reason to think that Macha will be gassed before the All-Star Break.

I should have known better than to rule anything out during this nightmare ride. But more on that in a second.

With the Brewers dropping four in a row to the Giants, falling 12 games under .500 and a country mile off the pace in the NL Central, we've got to downgrade the nullacct ManagerometerTM: 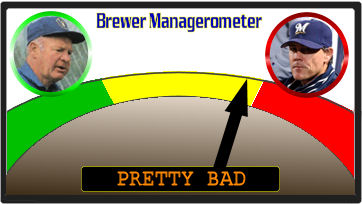 After the jump: it's time to make some tough calls ... if Ken Macha's going to be the one making the calls for much longer. And, as always, @notkenmacha.

This Week in Putting on the Big Boy Pants: Let's get right to it: if Ken Macha is going to continue to manage YOUR Milwaukee Brewers, it's time for him to stop mollycoddling some of the players on this team.

Ryan Braun says he's OK physically and doesn't need a day off? Don't care. Anyone who watches one of Braun's at-bats can tell that something's off. Dude needed a mental health day (if not a physical health day) a week ago. Give him one -- hell, give him two -- now, no matter what he says. And, no, taking him out after two at-bats during last night's massacre doesn't count.*

* But, yes, giving him the day off today does count. Thank you.

Jim Edmonds likes playing center field? (Note: this is a whole lot of conjecture on my part.) Tough turkey, JEd. There is no reason a 40 year old with a sore Achilles tendon should be playing center field while your 24-year-old defensive dynamo picks dandelions in right field.

My personal pet peeve, though? The fact that Randy "Walkin' Man" Wolf gets a personal catcher. I know, I know: Wolf and Lucroy had a hard time getting on the same page, and Lucroy was making a trip to the mound every third pitch, and Wolf was shaking Jon's signs off like there was a bee buzzing around his head. But, you know what? Wolf doesn't get the luxury of deciding who his catcher is, not when he's leading the NL in walks and he's given up almost 20 taters on the year. Lucroy is much, much better defensively, he's going to be the primary catcher next year, and, let's face it, Wolf can use all the help he can get. Let GeoKot catch Bush or Davis or somebody else who's not going to be here next year.

This Week in Playing for 2011?: In four words or less, here's the argument for not firing Ken Macha over the All Star Break: too little, too late.

In four words or more, here's the argument for firing Ken Macha over the All Star Break:

It's becoming harder and harder to disagree with the notion that Macha's not going to be with the club next year. From the quasi-lame duck status to the fact that Mark Attanasio shelled out $80+ million for a club that was out of the playoff race by the middle of June to the growing sense of apathy around the team, I don't see how Attanasio would permit Macha to lead this team in 2011, regardless of what Doug Melvin thinks.

And, if that's case, why not see what Willie Randolph or Dale Sveum could do with the group? Much as I was in favor of dumping Dave Bush and leaving Manny Parra in the rotation for the rest of the season (before the NarvDog had to be put down, of course), doesn't it make sense to see if Randolph or Sveum are worth considering as next year's manager, rather than playing out the season with a guy who won't be here next year? What is there to lose?

This Wiki in Nostradumbassery: Maybe I'm not the only who doesn't think Macha is long for the Brewers world. Check out Wikipedia's Ken Macha page: 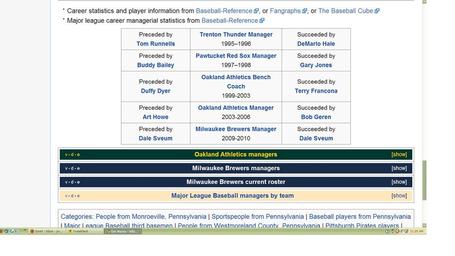 This Week in @notkenmacha: This week, our asked our (phony) manager if he'd given any thought to the idea of removing George Kottaras as Randy Wolf's personal catcher:

Glad to hear from you again. I have had some downtime this week, as I put the team on auto-pilot on Monday to catch up on my correspondence. Unfortunately, retaking control of the team on Tuesday and Wednesday hasn't borne noticeably better results.

Your question regarding personal catchers is an interesting one. The concept of the personal catcher was developed by Salty Parker in the Icelandic Mid-Atlantic Winter league back in 1962. Salty had discovered that assigning a specific catcher to each pitcher resulted in more effective pitching efforts. To this day, I have no idea how or why this worked -- after all, who was I to question the immortal Salty Parker? All that I was sure of, was that if a guy like Bob Apodaca was able to have his own personal catcher at his disposal, then a player like Ken Macha should have at least 5 personal catchers.

I quickly assembled my personal catchers, and we spent the winter hanging out, watching movies at the drive-in, chasing skirts, and wearing matching denim jackets and undershirts. I don't remember all of my personal catchers, but some of them were unforgettable, like Boots "Two-Bits" Day. We called him "Two-Bits" as we already had another guy named Boots in our crew. Two-Bits had an interesting fascination with Mickey Mouse, and the pornographic adventures of various Disney characters -- it got pretty weird -- Sid and Marty Kroft weird in fact, and I am quite sure it was in violation of the tenets of most Icelandic laws and religions.

Coco "Ponyboy" Laboy was probably the most educated and sensitive of my personal catchers. We called him Ponyboy derogatorily as it wasn't fashionable in those days to be either educated or sensitive. Rusty "Sodapop" Staub, was another personal catcher I remember, we called him "Sodapop" as that was his given Christian name, and Rusty was the nickname he got in middle-school because he drove a rusty Buick.

Near the end of the season, we were playing a crucial series with the Reykjavik Snow Soc, led by future American pop-teen heart-throb Leif Garrett. The series was a brutal one, with a lot of ups-and-downs for both teams. Things got somewhat out of hand when one of my personal catchers murdered Leif Garrett, after our final matchup and left him to die in a water-fountain. While we were under contract with our team, we enjoyed diplomatic immunity, and could rape, pillage and plunder as we saw fit, however once the last game had concluded, it was only a matter of time before the Icelandic fuzz were on our tale. As we were making our escape back to the States, I ordered Two-Bit to set fire to a church, as a diversionary tactic. My personal catcher Sodapop, acting on impulse, decided to put some kids into the church to ensure our escape. Reflecting on his actions, I am not sure it was either worth the effort or at all necessary. Sadly, this is exactly why a player should have multiple personal catchers, as Sodapop was critically burned in the fire. Hiding behind an igloo, I stared emptily into the blaze, as two of my personal catchers were taken in an ambulance to the local hospital.

When I arrived at the hospital, Ponyboy was reading poems from some dipshit named Robert Frost, about staying golden. I probably acted out of haste, but our taxi back to the states was about to leave, and the meter was running. I unplugged Sodapop's breathing apparatus, and hurried Ponyboy back into our waiting cab, back to the USofA. Sodapop was the first personal catcher I would euthanize, but he wouldn't be the last. I guess the moral of this story is that while you form a working bond with your personal catcher, it is inevitable that at some point who will need to remove some of them from life-support.

Rest in peace, Leif Garrett. You were a great baseball player, and a worthwhile opponent.