So, if the Brewers had blown that 3-0 lead in the bottom of the ninth yesterday, after Randy Wolf was yanked after giving out a one-out, Braun-aided "double" (cough, cough) and John Axford was inserted into the game a day after throwing 26 pitches in a 1.2 inning save ... would today have been a more interesting off-day for manager Ken Macha and MACHAWATCH!?

I'm not saying it's a given, not at all -- but had the Brewers blown that game, I could see cranky owner calling up his beleaguered GM, saying: "What in the HELL was that all about?" and demanding a change.

The world will never know.

There's no change in the nullacct Managerometer again, so I won't post the picture.  Instead, I want to share with you something that nullacct was nice enough to share with me a few weeks ago; I think you'll know when it's appropriate to summon this particular weapon from the arsenal.  May it be a light for you in dark places: 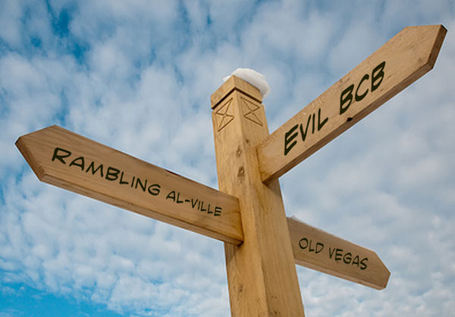 After the jump: we're talkin' bullpen (again) and bean balls (again) and @notkenmacha (as always).  Won't you join us?

This Week in Bean Ball Hijinks: Brewer-related, this particular item ain't, so let's get it out of the way first: in the first inning of yesterday's Tigers-Yankees tilt in the Bronx, Detroit starter Jeremy Bonderman pegged Yankee centerfielder Brett Gardner in the leg, presumably in retaliation for Gardner's hard slide into Carlos Guillen the night before, which bruised Guillen's knee and landed him on the DL.

As you'd expect, both benches are immediately warned by home plate umpire Eric Cooper, which made it all the more curious when Cooper didn't toss New York's Chad Gaudin when Gaudin tattooed Miggy Cabrera between the shoulder blades to open the eighth.  But even more more curious was Cooper's decision not to toss Detroit's Enrique Gonzalez in the bottom of the eighth after Gonzalez threw behind Derek Jeter.

Mighty fine deterrent effect that first-inning warning had there, Coop.

Folks, this whole situation is a mess, and baseball's attempts to stop the shenanigans border on the farcical.  I don't know what the answer is -- if we tell the umpires to butt out of it and let the teams police themselves, we're inviting lunatics like Tony LaRussa to go ever more overboard with this beanball nonsense.  If we try to narrow the discretion of the umpires -- by, say, ordering immediate ejections for any HBP after a warning is issued -- some pitchers who don't deserve to get ejected are going to get run.

This Week in Swinging Loe and a Dulling Ax: On Monday, KL did a fine job detailing Kameron Loe's absurd workload in the 2010 season; including the just-completed series against St. Louis, Kam has made 35 appearances in the two-and-one-half months since being called up from Nashville, with fifteen (15) of those appearances lasting more than one inning.  Unsurprisingly, given that workload and given that he'd probably been overperforming for his first two months with the Brewers, Loe's started to show some fraying at the edges in the last couple weeks.

Of course, Loe's not the only one being asked to shoulder a heavier yoke in the 'pen this year.  Closer John Axford has made 34 appearances in the three months since he was summoned from AAA, with nine (9) of those appearances covering more than one inning.  And you might remember that, before he was banished to AAA at the end of July, Carlos Villanueva pitched in 42 games for the Crew -- including twenty-five (25) appearances in April and May alone.

On the other side of the coin, David Riske has made a mere twenty-two (22) appearances since he returned from injury at the beginning of June, and Chris Capuano has made just thirteen (13) relief appearances since his first appearance on June 3.  Zach Braddock's stuff suggests that he shouldn't be pigeonholed as a situational lefty, but he's been used like one, pitching less than one inning in fourteen (14) of his 30 appearances.

I was concerned a couple of weeks back that Macha was going to continue to abuse his top performers in the 'pen, despite the fact that this season is a lost cause and that, by all appearances, there's nothing Macha can do to save his job at this point.

This Week in @notkenmacha: And because I'm very, very concerned now, I asked our fake skipper what, exactly, he was trying to accomplish by pitching Kam Loe every damn day.  Is he trying to kill the Snake King?

Your question pisses me off.

Who the hell is Kam Loe and why should I give two craps about him? Also, Kenneth Eugene Macha does not "try" to kill people, he kills people. If I wanted to kill Ken Snow, I just would walk past him, drinking a can of Ocean Spray Cran-Apple, and when I finished I would simply grab his bottom jaw and push my empty can through the back of his throat.

Incidentally, I invented the concept of "product-placement" back during the Cold War in the 1950s. Ocean Spray would pay me $10 for every communist that I killed with a can of their products. I would receive a bonus $5.50 if the newspaper would report that the target died looking "refreshed and satisfied".

What is getting on my last nerves though, are the chuckleheads at County Stadium giving me guff about my usage of relief pitchers. In the off-season Don Melvin asked me what I needed to make this team work, and I replied "Dawn, I need some quality pitchers for our bullpen". Well, I sent Melvin to the 7-11 for some pooper-paper and he brought back porcupines. Am I to blame that we don't have a pitcher in our bullpen that can outs when our team needs them?

As a side note, one summer when I was playing ball in the Ozark Recreational League, Ed Ott and I purchased some "Quality Aged Taco Bell" burritos, and had to make a run to the border (if you know what I mean) while we were enjoying a nature ride through West Memphis. The only thing we could find to clean our backsides were a family of porcupines. We learned quickly to wipe "with" the quills and never "against" -- or what is know in the baseball bedroom circles as "Tony Curtising".

This whole poppycock has me in a zim-zam. If you would excuse me, I am going to march my ass over to the front office -- I am thirsty, I have a six-pack of Ocean Spray, and I could use $15.50.