We're coming into the home stretch, Friends of the Show: soon the calendar will turn to September, rosters will be expanded, and a bevy of precocious youngsters will have the chance to put their skills on display* ...

Assuming they're not fools, of course.

Ken Macha does not suffer fools.

But more on that in a second.  First, it's show and tell time!  I didn't want to bore you with another picture of the stagnant nullacct Managerometer, and I didn't have time to send him this picture yet, but I'm hoping he works his magic on this tasty treat that I spotted in the store this morning: 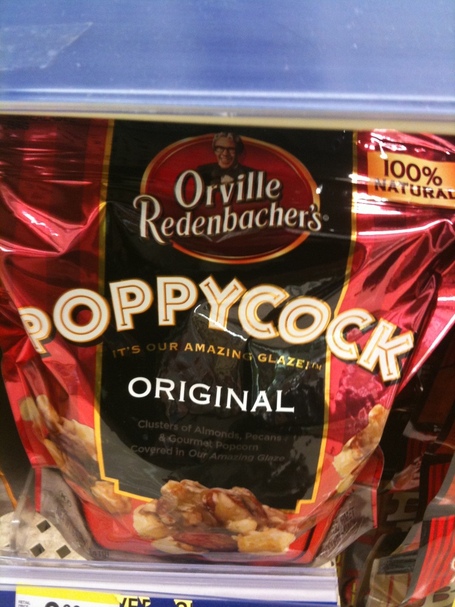 POPPYCOCK: it's not just for not cursing anymore!  And it's 100% natural, just like your man Ken Macha!

Alright, let's get down to business, after the jump: I'm sick of talking about the 'pen, so we'll do a brief MACHAWATCH! on CarGo, and a pinch hitter for @notkenmacha.

* Quevedo Day also falls in there somewhere.  Mark your calendars (if you remember what day it is), loosen your belt buckles, and help me inhale a bacon-stuffed meat cake or two.

This Week in Rhymes and Reasons: While I've struggled to make sense of Ken Macha's use of his bullpen at times this season, I believe I've sussed out his pattern for using late-season call-ups and extra position players.

Remember last fall, when a bunch of us were up in arms over Macha's refusal to play Mat Gamel in the waning weeks of the season?  It seemed a curious decision (and, truth be told, it was the only decision of Macha's that truly irked me last season), but there were rumblings that Gamel didn't have the best attitude -- exemplified, perhaps, by Gamel being the last player to report to Spring Training in '09, and then showing up with a bum shoulder, to boot.  This season, there's been more talk -- this time from Sounds manager Don Money -- suggesting that Gamel might not be going about his business the right way.

In sum: I don't think it's far-fetched to think that part of the reason Gamel didn't see any playing time last September was Macha's desire not to reward a kid who he (Macha) thought was a knucklehead with a questionable attitude.

Now, whether Gamel's had some kind of epiphany in the last couple months, and whether Macha's feelings about the kid are subject to change, I don't know.  I certainly hope so, but that's not the point of this particular item.

The point is that, based on Macha's history, I don't think we have to be concerned about seeing Carlos Gomez very often in September (and I wrote this before C-Dick, not CarGo, was the defensive substitute in the seventh inning of today's loss to the Dodgers).  Regardless of what we may think about Gomez's recent "I feel I'm the best centerfielder on the team" comments -- like me, you may think that it'd probably be wise for CarGo to keep his mouth shut and let his play on the field do the talking, or, unlike me, you may think that Carlos was showing an appropriate amount of confidence in himself and his skills -- I don't think that kind of talk is his manager's cup of tea.  We'll see, of course, but I'd be surprised to see Gomez start more than a handful of games in center for the rest of the year.

This Week in @notrickpeterson: Speaking of players who made questionable comments this week, I asked our phony pitching coach if he had any thoughts on Manny Parra's recent demotion to the bullpen.  He took a break from filming his latest webinar to respond:

Y'know, Rubble, if there's one thing you should have learned from all of this, it's that Manuel doesn't want to talk about your negative stuff, and neither do I.
No one wants to talk about my accomplishments. Last week, I washed and conditioned my hair three times in seven minutes, a new personal best. On Tuesday night it was 68 degrees outside, and I made it three whole innings before I put my jacket on. I lead the major leagues in mound visits. And all you want to talk about is how I somehow made Manny worse than he was last year.
The truth of the matter is, Manuel loves webinars. He's the only guy who's watched them all. He checks the site three times daily, to make sure he's not missing one. And when he's been out on the mound too long, he starts to worry he's missing one. So he runs back to the clubhouse between innings to check. He starts to get nervous if he's out there too long, and no number of hands on his shoulder can fix it. We figure if we move him to the bullpen, he can take his iPad out there and he'll never miss a webinar (or an episode of SpongeBob) again.
I'm going to sign you up for a webinar on softball questions. It's the most important webinar I've ever held.