So the big uni story was, of course, Chris Capuano taking the mound in Houston wearing a different jersey then the other Brewers. The team was sporting the new-this-year "Milwaukee" navy blues and Capuano took the mound wearing the navy "Brewers" jersey.

The end of this J-S article gives a bit of explanation as to how the snafu happened:

"Equipment manager Tony Migliaccio explained that road uniforms are placed in each player's bag prior to the start of a trip. This year, the Brewers have worn blue alternate road jerseys with 'Milwaukee' on the front for the first time.

Migliaccio said Capuano likes an extra jersey to change into at times and mistakenly added a blue alternate home jersey with 'Brewers' on the front.

'We didn't see it until he was on the mound,' said Migliaccio. 'You can't run out there in the middle of the game.'"

Go here to see video of Cappy in action and hear some uni chatter from both BA and Rock as well as the Houston TV crew.

Though the mix-up is easy to understand, it's still surprising that no one in the bullpen noticed it while Cappy was warming up. It might be more surprising that home plate umpire Phil Cuzzi didn't notice or didn't care. 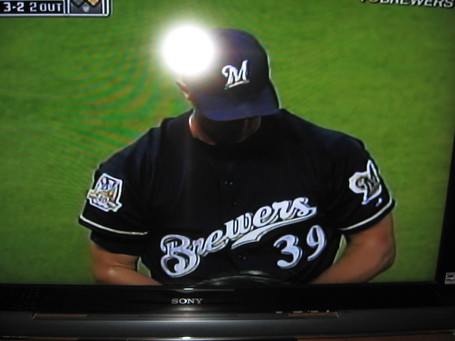 (thanks Kyle for the screencap)

The last homestand also featured 90's throwbacks. Paul over at UniWatch wisely pointed out that while it looked like the team had era appropriate logo'd batting helmets made, they might have just been repurposed navy batting helmets. They're awfully scratched up to be brand new. 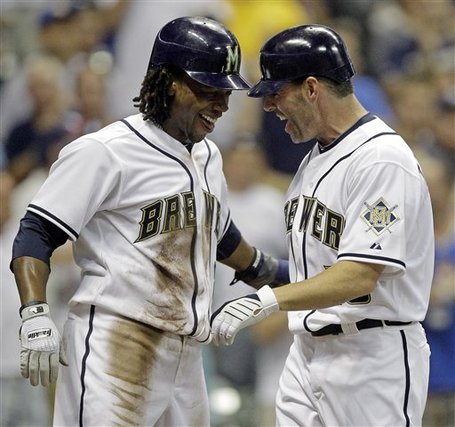 They're not my favorite uniforms, but I do love the really nice use of piping.

In the ongoing Escobar socks-capades, he was high-hosed to start the series in Chicago and had a hot game at the plate. They were still high for last night's game.

The odd-looking under-placket was in full effect when Randy Wolf was pitching this past weekend. None of the team's other jersey's has this awkward continuation under the buttons, leaving us to wonder why this awkward look happens with this year's new "Milwaukee" jersey. 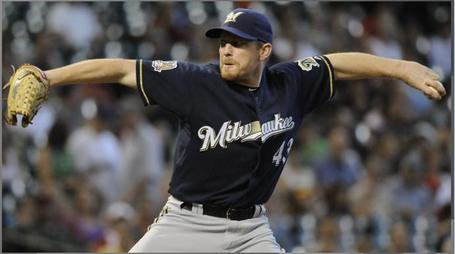