Some things to read while pitching your Hitch as Barry White's ghost movie.

The Brewers lost to the Astros yesterday and are now 6-8 against them on the season. Last season this would have probably been seen as a sure sign that the Brewers were toast. This season? Well, the Astros might actually be good. Since trading Roy Oswalt (as well as shedding Feliz and Berkman) the Astros are 28-16 and are only 5 games under .500 and 5 back of second place St. Louis who are imploding. So, ummm, good for them? I guess.

Chris Capuano took the loss last night for the Brewers. He gave up a three run homerun in the first, but that was it as he went 6 1/3 for the quality start so not much to complain about there. Al's Ramblings would like to see him back in 2011 to fill out the rotation with Gallardo, Wolf and two PTBNL. Of course, Chris Narveson (who Al also wants back) might have something to say about that. Somewhere Doug Davis just read that and made this face. 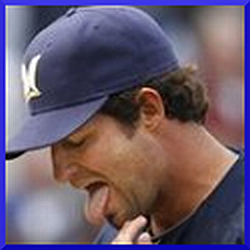 Bud Norris got the win last night for the Astros as he combined with the bullpen to only allow two runs, both coming on solo homeruns. One of those came from Ryan Braun who has been the hottest hitter in baseball since August 2nd according to the JS. His OPS by month:

Yeah, I'm pretty sure he was injured this summer.

Not so hot? Prince Fielder who returned from the flu to be the Brewers LVP last night. Maybe Gamel could have gotten one more start then, eh Ken? Richard Dean tells us that Prince wants to start another streak. That article features this interesting quote from Prince:

Whatever happened to the good old days of guys giving 110% everyday? Or even a hundred? Now we're settling for 80%? Really?

Well, I guess that explains his defense. (*rimshot*)

Prince Fielder is almost surely to be traded in the offseason and The Brewers Bar has a look at what a Prince-less offense would look like. Spoiler: not bad.

Of course, we could have already traded Prince to the White Sox in a one-for-one with the White Sox for Daniel Hudson who is now 6-1 with a 1.67 ERA with the Diamondbacks, but apparently he wasn't good enough. No pressure when you do finally move him Doug, no pressure at all.

The big news of the day was the Brewers 2011 schedule being released and it does not look good with road series against the Yankees and Red Sox as well as home series against the Rays, plus the usual Twins series giving us four of the best teams in the American League. That should be fun in a "losing is fun" kind of way. Oh, but that's not all, as Adam McCalvy points out they also play a 29 games in 30 days stretch that features all four of the previously mentioned teams. Good times!

Plus, as Al points out missing out on two marquee sellouts makes it feel far worse. The Brewers Bar tries to make light out of the situation by arguing that our division rivals will play the same teams and probably fare about the same, but that's just not true.

- The Cubs get the Yankees and Red Sox, but skip the Rays and play the Royals instead. Plus the White Sox, natch.
- The Cardinals play the Blue Jays, Orioles and Rays as well as their hated rival Royals. (Also, if you are immature like me you can laugh at this.)
- The Astros draw Toronto, Boston and Tampa Bay, plus their rival Texas Rangers.
- The Reds take on the Yankees, Orioles, Blue Jays, Rays and Indians.
- And the Pirates play... HAHAHA! Just kidding, who cares who the Pirates play? Like they have a chance!

I would say that of all the teams in the division the Brewers have by far the hardest interleague schedule. The difference between playing the Blue Jays and Orioles versus the Yankees and Red Sox is about the same as the difference between George Clooney and Tyler Maas. Really it makes me hate the Cardinals even more for having such good luck.

On the bright side, this leaves Seattle as the only interleague city that Milwaukee hasn't visited. For a list of this and where other teams haven't been check out this cool post at Big League Stew. It's cool MLB, it's not like anyone would want to visit Seattle anyways. Right ladies?

Finally, for the three of you who are interested (Kyle is on vacation) we are looking at Pittsburgh or Houston in May for Miller Park Drunk's Pants Party 2: Electric Boogaloo.

For the statheads in the house Baseball-Reference has updated their park factors. The Brewers remain relatively unchanged and still rank as "likely to give up homeruns for multiple runs, but only hit solo homeruns." Crazy what they can do with statistics these days.

Sad about playoff baseball and not getting to hear Chip Caray say "fisted" another 600 times? Good news, the Brewers own Brian Anderson has joined the TBS team.

On this day in 2008, the Brewers fired Ned Yost. I don't know about you, but I know exactly where I was when I first found out about it: leaving the zoo. That's not a joke, that's really what I was doing.

Now if you'll excuse me I am going to try and win an oyster eating contest.