After last week's abbreviated MACHAWATCH!, there was some talk of shutting this baby down for the season, icing down the arm, and saving our bullets for next year.  We've never thrown this many innings, after all, and the life on our fastball is fading quickly.

Then we remembered that there isn't going to be a MACHAWATCH! next year.  So we'll Dibble this thing, doctor the ball with some Crisco, and pitch through the pain.

If you're not hanging around the game threads because the season's gone down the crapper, you're missing out, people.  nullacct is like a Bizarro version of the Cohen Brothers, consistently cranking out comedy gold.  Last night was no exception, and MACHAWATCH! HQ found it especially funny: 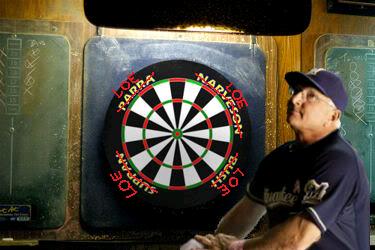 After the jump: why the NarvDog should be barkin' mad at his skipper; some self-congratulation; and, after a one-week hiatus, @notkenmacha.

This Week in Standing By Your Man: If there's one glaring contrast between Ken Macha and Ned Yost, it's the former's refusal to participate in the "stand by your player at all costs" behavior that was a hallmark of the latter's tenure.  While Ned's dogged insistence on defending his players at every turn provided us with such gems as "Rickie is a run-scorer" and "you can't say Rickie's underachieving, because he's never achieved up here," the quotables have been fewer and farther between under Macha.*  But his comments about his decision to remove Chris Narveson from last night's game, after the NarvDog walked Ramon Hernandez with one out in the seventh, stood out to me:

"I didn't want him to pitch that whole game and get a loss," said Macha ... "He was going to be in there until he got a man on. He did his job. Three relievers came in and didn't get anybody out."

Do you read that quote the same way I do -- that Macha had zero confidence in Narveson's ability to get out of that inning without surrendering the lead?  Put aside, for a moment, the accuracy of Macha's comments; he's almost indisputably right to have little faith in Narveson (as FtJ so eloquently put it this morning: NarvDog's got a terminal case of teh sux), but did he really need to announce that publicly?  If I'm Narveson, I'm taking advantage of the skipper's open door policy today; as diplomatically as possible, I need to ask Macha: "What in the **** was THAT all about?"

There has to be a happy medium in between the Yostian Extreme and the Macha Extreme, no?  Or am I not paying enough attention to the behavior of other skippers around the league?  Do most managers fall on one end of the spectrum or the other?

* Save for POPPYCOCK and zim-zam, of course.

This Week in Navel-Gazing: Hey, remember last week, when MACHAWATCH! argued that, based on his comments about being the best centerfielder on the team and Ken Macha's unwillingness to suffer fools, Carlos Gomez wasn't likely to see much action for the rest of the season?

Just in case you're keeping track -- since being activated from the DL, CarGo's numbers look like this:

Fine, we didn't exactly go out on a limb with this particular prediction.  But a win's a win, right?

This Week in @notkenmacha: You may have heard that Nationals outfielder Nyjer Morgan lost his mind last night, charging the mound after a pitch was thrown behind him, getting decked by a clothesline, and then walking off the field with his shirt unbuttoned and his arms raised like he was some kind of WWE heel.  @notkenmacha certainly heard about it, and he's a big fan:

Last night after we lost to the Senators, I decided to head to the nearest Perkins and eat a whole key lime pie. I figured submerging myself in pie would help me piece together my strategy for keeping Mat Gamel on the bench and off my ass for the rest of this shitty season. Normally when I walk into a Perkins I unilaterally demand that all the TVs be turned to the Weather Channel, or the Hallmark Channel -- if Father Dowling Mysteries is on. However, last night they had the TV tuned into the ESPN and I witnessed one of the greatest baseball plays I have ever seen on a diamond, since my days playing in the Yukon Nightime Exploratory League.

Nyjer Morgan is Viagra in its purest baseball form. I have never had the honor or pleasure of coaching for or against Nyjer Morgan, but I can tell we are kindred souls, and it is only a matter of time (probably the same amount of time it will take for our Canadian dipshit front office to get canned) before we are united to create sweet baseball magic.

Kenneth Manson Macha has only one baseball rule. "If a pitcher throws behind you, you better charge the mound". Of course this should be apparent to any one of your readers that can fog a mirror -- but since it is safe to presume that most of your readers are paste-eaters, I will expound on this truism briefly. A batter doesn't get awarded first base if the pitcher throws behind him, therefore, rather than let that dipshit throw at you again, hustle out there and kick his ass.

One thing that pisses me off about this team I am managing, is that they keep getting hit like a lot of little bitches, but never charge the mound. This fat guy named Prince Falkner, keeps getting plunked -- some of it probably due to gravitational pull -- but some of it is intentional. When Porky gets plunked, what does he do? He stares at the pitcher as if he has heat-ray vision. Lame. After the game, he will come into my office and ask me what I am going to do about it. I tell him that it is not my job to rub his belly, and kiss his boo-boos. He will inevitably ask me to have one of the pitchers to take care of his business for him -- of course this is silly, as it is a scientific fact that pitchers are pussies, and at the end of the day Pudgie is going to need to learn how to cash his own checks. I always remind him, that no pitcher is going to hit him harder than his tits already do when they are slapping against his face when he runs. This guy's inability to charge the mound  makes us all look like a bunch of tools.

I also want to tip my hat to Gabby Sanchez who executed a perfect Salty Parker clothesline. As a side note, I teared up a bit as I realized how much America misses Salty Parker, and how we could really use him in our time of national need. Back in the early 70s when I was in spring training with the Pirates, Salty Parker taught all of his first-basemen how to clothesline opponents. Of course we couldn't practice clotheslines on real people, so Salty would round up a bunch of Hungarians to help us with our drills. The Hungarians would form a circle around a first-baseman, and charge the center of the circle one at a time. The first baseman would clothesline the first Hungarian, and then perform a ninja-roll, and be ready to hammer the next attacker. Willie Stargell was the best clothesliner I ever saw. In fact his nickname "Pops" came from his ability to "pop" off Hungarian noggins. Attention to execution is what made Stargell a Hall of Famer.

The only thing wrong with the whole Morgan incident, was that Kevin Mench was allowed to be on camera. When I agreed to rejoin MLB, part of my stipulation was that Kevin Mench's head would not be allowed to be shown on TV. How is a stud like Morgan getting drilled left and right, while a dud like Mench has gone through the season unmarked? I noticed that Mench has 15 plate appearances this year already -- that sounds like 15 chances to be plunked....

I need to settle down before the key-lime gets sour in my stomach.

Best to you Richie,