Meet Dom Brown. He's been in the Phillies system since he was 18 and finally got his chance to make his major-league debut when Shane Victorino was injured earlier in the season. Many see him as the heir apparent to Jayson Werth, whom they assume the Phillies will lose to free agency after this season. 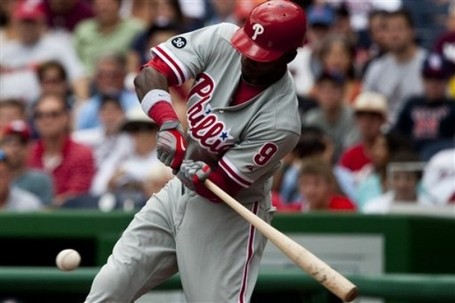 He was hitting .330 with 20 home runs in 93 AA and AAA games this season. In the majors he provided some pop when many of the team was out with injury. He's hitting .231 but has a slugging percentage of .404.

Since Victorino returned from the DL, Dom Brown has seen little playing time and Phillies fans are getting antsy. Victorino has struggled at the plate since his return, but manager Charlie Manuel comes from the Ned Yost school of standing behind his players. Victorino has not been sat down and Dom Brown continues to languish on the bench, seeing occasional pinch-hitting opportunities.