It's been months since I've had a reason to post this: 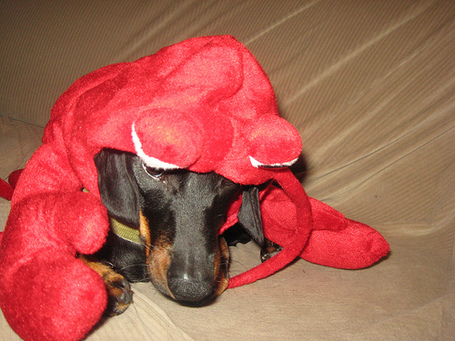 Bust out your Rally Lobsters and get ready for Cactus League baseball!

Follow the jump for pitching matchups, lineups and more from today's split-squad doubleheader!

First, the home game: Shaun Marcum (3.64 ERA, 3.74 FIP in 2010) takes the mound in a Brewer uniform for the first time today against the Giants. Marcum (like all the other Brewer starters) is expected to throw around 35 pitches in his spring debut, which likely means two innings.

Marcum's repertoire will probably be toned down a bit today, but when he's on he relies on one of the game's best changeups, which was worth +3.35 runs per 100 pitches in 2010 according to FanGraphs. When he's not throwing the changeup, he throws a high 80's fastball, a cutter, curve and slider.

He's faced the Giants once in his career, in an interleague matchup in 2010. He pitched five innings in that game, allowing one earned run on four hits, walking five and striking out eight in five innings.

Marcum will face Barry Zito (4.15 ERA, 4.25 FIP), who has been quietly solid for most of the last two seasons, pitching 391 innings and posting a value of 4.3 fWAR. Of course, he'll always be overshadowed by his ridiculous contract.

Zito throws four above average pitches, according to FanGraphs: A mid-to-upper 80's fastball, a curve, slider and change. None are very far above average, though: They're all estimated between 0 and +0.5 runs per 100 pitches.

Zito faced the Brewers twice last season and posted a 3.38 ERA in 10.2 innings, walking seven and striking out ten. Ryan Braun took him deep once. He won't get another chance today, since he's playing in the other game.

Against the Cubs, Tim Dillard (did not pitch in the majors in 2010) gets his first chance to prove he deserves consideration for a roster spot. Dillard hasn't appeared in the majors since allowing six earned runs in 4.1 innings in two relief appearances in 2009, but posted a 4.12 ERA in 109.1 innings for Nashville last season, making eight starts and 33 relief appearances.

Dillard is unlikely to make the Brewers out of camp this season, but assuming he sticks with the organization he's got a shot at making some history: He's five wins, 100 innings and 90 strikeouts away from being the Sounds' career leader in all three categories.

Dillard will face off against Randy Wells (4.26 ERA, 3.93 FIP) in his first start. For a guy who looked like a career minor leaguer a couple of years ago, Wells has turned into a solid major leaguer. Since being called up in 2009 he's made 59 starts as a Cub with a 3.65 ERA.

Wells has a three pitch repertoire: He works right around 90 with his fastball, relies heavily on a slider (27.1% of pitches) and throws a fair number of curveballs (17.5%). According to FanGraphs the slider was his only above average pitch in 2010, at +2.08 runs per 100.

Wells faced the Brewers three times last season and was knocked around a fair amount: He posted a 6.23 ERA in 17.1 innings, allowing 27 hits and a walk while striking out 18. Prince Fielder is a career .400/.438/.667 hitter in 16 PAs against him...but that doesn't much matter, since Fielder is playing the Giants today.

WTMJ has the Brewers-Giants game. There's no Brewer broadcast of the other game, but WGN has the call for the Cubs. Both broadcasts are available via Gameday Audio.