A few minutes with Rollie Fingers

Share All sharing options for: A few minutes with Rollie Fingers

I was given a chance to talk to Former Brewer Rollie Fingers in conjunction with his appearance in a new Pepsi Max commercial. Pepsi Max is a new MLB sponsor and the spot features quite a few former greats as well as a couple of current stars. The Racing Sausages also make a cameo. (click here for behind-the-scenes footage, interviews and more)

I got 10 minutes with Fingers. Follow the jump to read about the difference in the role of relievers, missing the World Series and Marge Schott's Saint Bernard. 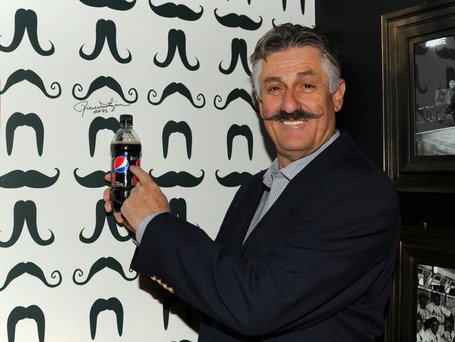 The anniversary of your setting the AL save record was last week. You're considered one of the pioneers of modern relief pitching. What do you think about relief pitching today? How do you feel about Trevor Hoffman and Mariano Rivera?

Everybody has one pitcher per inning. The guys specialize. There are one-inning pitchers. I would go out there sometimes for four innings. It’s a completely different animal now.

Mariano and Trevor are two of the best one inning pitchers there are. Both have 500+ saves to prove it.

How often do you get back to Milwaukee?

Not a whole lot. I’ll be back in May for an event at the stadium. I get back a couple of times each year. I haven’t seen too many ball games lately. I live in Las Vegas so I don’t see too many professional games.

Tell me what it was like for you to have to miss the 1982 World Series.

Golly, that was like putting needles under my fingernails. I hated it. There were a couple of ball games I thought I could make a difference in, but I just couldn’t go.

I tried to get healthy for the playoffs and the World Series. I threw and had soreness.

I threw batting practice before Game 3, just to see how it felt, but there just wasn’t the velocity. I didn’t have it.

I didn’t want to blow it [his arm]. I ended up having to have surgery on the muscle after the season and missed all of 1983 because of that.

What was the difference in tone between the Athletics' championship teams and the 1982 Brewers?

There’s not much difference between the two. When you’re winning, everything’s working right. We won with pitching and timely hitting and defense. We had pitching and hitting working at the same time in Oakland. We won for multiple years[ in Oakland].

Milwaukee - we were a better offensive team than pitching team. We had Gorman Thomas, Ben Oglilve, Robin Yount, Jim Gantner [Paul] Molitor. We had so much power.

What is it like to have your number retired by both teams? Especially since you were in Milwaukee for just a few years.

It was an honor. Anytime you get your number retired it’s an honor.

It took Oakland a while to retire my number and in Milwaukee it happened six or seven years after I played.

But it’s an honor to go to the ballpark to see your number up there or see a big picture of yourself in the breezeway.

I had a back operation in the offseason and I lost velocity. I wasn’t throwing as hard and the breaking stuff wasn’t working. In addition, I didn’t get a chance to pitch as much as I would have liked. A lot of times I was asked to come in for just one inning. Then I would sit for a week or a week and a half. It’s hard to stay consistent when you’re working that way. I didn’t get in to a whole lot of games.

But I did have, I think, 17 saves that year, so I had stretches where it went well. I did well when I was pitching every other day. I got into a groove.

What led to your retiring?

Well they [the Brewers] gave me my release so I had no other choice. I wanted to play. I could have played that next season. I felt I could still pitch well.

That summer, Pete Rose called me up and told me he wanted me to play for Reds. So we talked and he told me the GM would call next day and ask me to spring training.

So the GM called and said we’d like to invite you do camp, but you have to cut your mustache off. I asked why. He said Marge Schott had a rule that said no facial hair. I asked him if he was serious. Then I said that he should tell Marge to shave her St. Bernard and I’d shave my mustache. So that was the end of that, I wasn’t invited to camp and I retired.

Tell me about filming this commercial

We filmed the commercial about a month ago. We were in this big warehouse and they made the warehouse look like a cornfield. It was a take off of Field of Dreams. And there was a Pepsi Max machine sitting in the middle of the field and its empty and we’re sitting around and waiting for delivery.

Lots of good players in the commercial:

They brought back some good ballplayers. It took us eight hours for us to film a 60 second spot. 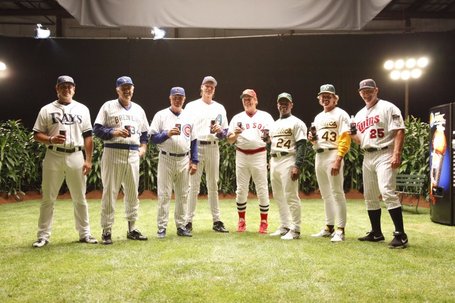 What else do you do with your time?

Chase my kids around – I have a 6 year old and an 8 year old. I play a lot of golf. I do a lot of charity golf events. Living in Las Vegas, there’s a lot of chance for me to golf. My son starts little league this year, so I plan on spending a lot of time at the ballpark with him.