Series Preview #24: Talking Red Sox with Over the Monster

Share All sharing options for: Series Preview #24: Talking Red Sox with Over the Monster 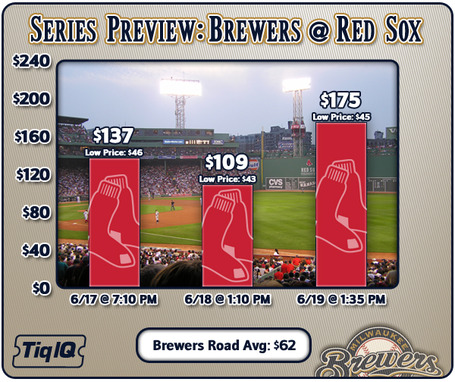 Click here to see available tickets via BCB and TiqIQ.

Ben Buchanan of Over the Monster kindly answered some questions about the Red Sox for us.

NB: I've been amazed over the past two seasons on how well the Red Sox have performed despite having so many players each year lose time to illness or injury. Right now the Sox have 5 players on the DL and they've had 11 trips to the DL total in 2011. Other teams, like the Cubs and Twins, have been hit by injury and haven't been able to climb out of the hole. The Sox, on the other hand, have the most wins of any AL team. What's the reason behind their incredible resiliency?

BB: There's no doubt that part of it just comes from having the money to spend, but there's also no denying some unexpected, even inexplicable performances both from their replacements and other places. The 2010 Sox were, after all, designed to be successful with David Ortiz (.238/.332/.462 in 2009) and Adrian Beltre (.265/.304/.379 in 2009) in the lineup. Expectations were higher than those figures for both, but they were not exactly expected to be the top-tier middle-of-the-order bats they were. So when guys like Jed Lowrie, Darnell McDonald, and Bill Hall were able to provide surprisingly big bats, the hole they had to make up to reach expectations was not nearly so great as expected.

As for this season, though, our DL trips might not really be the most accurate portrayal of injury problems. A good few of the players who have made their way to the DL were probably sent there more to get them off the roster than to help them recover from any major injury. The main hits have been Daisuke, who wasn't the hardest of contributors to replace, and Rich Hill, who was looking like he could be a very real strength in the bullpen before going down. Otherwise, it's more a matter of just having the same disappointing players every other team runs into. The Sox just have the money to be able to compensate for that.

NB: The Brewers have been unsettled at shortstop since trading J.J. Hardy after the 2009 season. The Red Sox have their own shortstop issues to overcome since Nomar Garciaparra was traded in 2004. Right now, the starting position has been flopping between Marco Scutaro and Jed Lowrie due to injury. Jose Iglesias is rapidly progressing. Who's the best shortstop option for the Sox right now, and what's coming in the future?

BB: The one man who should really be in the spotlight is the one least often mentioned: Yamaico Navarro.

Jed Lowrie seems to be headed back to the DL with a bad shoulder, which would lend credence to those who have considered him injury prone in the past. Marco Scutaro has done well enough to hold down the position, but somehow does not seem to get the credit he deserves for playing through an injury for pretty much the entirety of 2010.

But if we're looking for a real long-term answer to the position, I have to go with Navarro. Always a solid sleeper prospect in the Sox' system, Navarro had failed to draw big attention due to having some difficulty with mid-season promotions early on. About half-way through 2010, though, he really seemed to break out, adding some power to his already impressive plate discipline. He was forced into a very early MLB debut by some more injuries (of course), but had a good early showing in Triple-A Pawtucket, was impressive in the Winter Leagues, and then absolutely killed the ball to start the season in Pawtucket before being sidelined with a strained oblique. He's finally made his return tonight (Thursday), so after a few more games to get back in the swing of things, he might be due for a promotion with Lowrie out.

Jose Iglesias may get a lot (see: way too much--people were calling for his promotion before he played a month of affiliated ball) of media attention, but right now his bat is non-existent. Navarro represents the possibility of the total package, and shouldn't be overlooked for a defensive wiz with an OPS 100 points lower than Navarro's slugging percentage.

NB: What's the state of catching for the Red Sox? Former backup catcher for the Sox George Kottaras has been backing things up in Milwaukee on and off for the past two seasons. How do Jarrod Saltalamacchia and Kottaras compare, if there's even a comparison?

BB: Things seem to be finally turning around for Jarrod Saltalamacchia, who has had ~30 very strong days, raising his OPS from .514 on May 13 all the way up to .745. Piazza he's not, but Salty has come around enough that Sox fans are willing to live with his defensive issues behind the plate. We just hope it's something that he'll be able to keep up instead of dropping back down.

Comparisons between Kottaras and Salty are a bit too easy to make, really. Both highly-ranked prospects in their time known much more for their bats than their gloves, neither has really been able to put it together in the majors. It's great to see Kott holding down a major league job, though, so here's to hoping he convinces you guys to keep him around for a while longer.

NB: The Sox also have a recent former Brewer on the team. Mike Cameron missed a lot of time due to injury in 2010. How has he been doing in a backup position in Boston?

BB: Age seems to have finally caught up to Cameron. I was a strong proponent of the signing at the time, considering Cameron something of an athletic freak who never seemed to show his years, but he injured his abdomen early last year and has never really returned to being the old Cam. He can no longer hold down center reliably, and seems to have more and more lapses even in the corners, be it due to lack of play or diminishing of skills. Things are no better at the plate, either, as he can't even seem to hit lefties anymore. Sadly, the result has been the alienation of the fan base, though he seems to be a great guy both in the clubhouse and outside of the park.

NB: The Brewers were going without a situational lefty in the bullpen for a while when Zach Braddock was on the DL. The Red Sox haven't had much luck with their LOOGYs in 2011. Is a left-handed reliever necessary to the composition of this year's bullpen?

BB: The Sox almost had their LOOGY in Hill, but alas, now he's headed for Tommy John Surgery, leaving them with Tommy Hottovy.

Unfortunately, that doesn't seem to be the way Terry Francona sees things, leading to Hideki Okajima getting tons of appearances in 2010. Now-a-days we have Tommy Hottovy as the designated LOOGY, but that's not really the problem since there's no obvious replacement for him. Right now, the Sox are feeling reasonably confident in the last two innings, and hoping they'll be able to use Matt Albers and Alfredo Aceves as a decent combination of middle-inning relievers.