Review: B is for Baseball Alphabet Cards

Share All sharing options for: Review: B is for Baseball Alphabet Cards 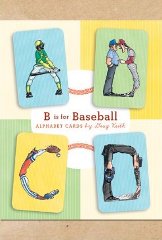 As the only resident Jesuit, Mon Calamarian, and father who openly proclaims his love of kids music (really, some of it’s pretty good!), Kyle thought I would be a good choice to write about B is for Baseball Alphabet Cards by Doug Keith. (We don't want to rehash the loss to the Reds again, do we?) These flash cards are your basic alphabet card set with a baseball drawing on one side and text of the letter on the back.

Although my little one has only been to Miller Park four times, she knows baseball related items at first glance. So it took my two year old all of two seconds to start looking at the cards and rattling off the letters. It was a great opportunity for me to start to explain to her about hitters, umpires, catcher and lots of other baseball terms.

B is for Baseball is features the drawings of Doug Keith. The guy is no slouch; his bio says: "Doug Keith has worked on more than forty illustrated books, a series of popular alphabet posters, and numerous fine art commissions. He has received the Emmy Award for Graphic Design and the Publishers Marketing Association (Ben Franklin) Awards for picture book illustration."

His illustrations are really top notch and I found myself looking at the drawings for several minutes checking out all the little details. The letter ‘K’ is a fat-bellied ump talking to the catcher, the letter ‘C’ looks like Ryan Braun misjudging a ball in left field, the letter 'V' has two players diving after the same ball.

The set comes in a box that is small and compact, and I fully expect this will be one of the first things we pack on our road trip to the College World Series. With Father’s Day right around the corner, this thing is pretty much a no-brainer: it’s a fun, inexpensive gift that will provide hours of continued entertainment and baseball education for the kids. The alphabet letters on the back works well for the younger set (2-4yrs old) and the baseball drawings will keep the older kids (5-101yrs old) interested for a long time.

The book is available at your local independent book store or at Amazon.com