Some things to read while watching for Frank Catalanotto.

The Brewers resumed their road struggles last night, blowing a 3-0 seventh inning lead and losing the game and the series in Cincinnati. Most of the frustration this morning is centered on the Brewers' decisions to A) enter the series against the Reds without a lefty in the bullpen and B) allow Kameron Loe to face Joey Votto with the game on the line in the eighth inning. Keep Turning Up The Heat! called the decisions stupid.

Here's the thing, though: I'm not sure what anyone honestly expected the team to do here.The no-lefty situation is a tough one, but the only healthy and available arm the Brewers could have added to the pen is Danny Ray Herrera, who they just claimed off waivers last week. Mitch Stetter, Zach Braddock and Manny Parra (who doesn't get lefties out anyway) are all unavailable. If you want to make the case that Herrera should be on the roster instead of a guy like Tim Dillard or Mike McClendon, I guess I can see that. I think you're overestimating the difference it might have made, though, because Herrera is anything but a stud reliever.

The second-guessing of the Loe decision really has me shaking my head, though. He entered last night's game having allowed just two hits over his last nine innings of work, and having allowed a run in just four of his last 20 outings. Even after allowing the home run to Votto, he's holding opposing lefties to a .208/.296/.396 line this season. People are acting like Ron Roenicke threw the gas can into the fireplace. I'm not sure what you wanted done differently.

Moving on: Casey McGehee sat out last night's game, with Craig Counsell starting at third and going 0-for-3 with a walk. Jaymes Langrehr of The Brewers Bar asks if it's time to bump McGehee down in the lineup. Adam McCalvy talked to McGehee about his slump and found some reasons for optimism going forward.

The Brewers have a day off today before opening a series in Florida tomorrow, and Jesse Sanchez of MLB.com has a preview. The Marlins may be a bit shorthanded, though: They're expected to place reliever Clay Hensley on the DL today with a shoulder injury and shortstop Hanley Ramirez could join him with a sore back.

Yuniesky Betancourt went 2-for-4 last night and drove in one of the Brewers' only runs. Carson Cistulli of Baseball Nation spotted a little-known clause in his contract.

Looking back a day, here's something I found interesting. Jonathan Lucroy, who is normally a relatively fast home run trotter, narrowly avoided having the slowest trot of the day on Tuesday. Lucroy clocked in at 24.6 seconds, and only David Ortiz was slower. Ryan Braun thinks Lucroy deserves consideration for the All Star team. Lucroy was also named the Brewers' Player of the Month for May, with Yovani Gallardo winning Pitcher of the Month.

The Brewers had a very good month of May, but apparently most of their individual performances weren't enough to catch the attention of MLBDepthCharts: LaTroy Hawkins is the only Brewer on their NL May All Star team.

The Brewers' strong month put them right back into play in the NL Central, but can they stay there? Howie Magner of Milwaukee Magazine looked back at the first third of the season and says the Brewers are contenders. Dan O'Donnell of WTMJ says they'll be in trouble if they can't pick up the pace against the Reds and Cardinals.

Today in trade rumors: If the Brewers decide they need another lefty, Jack Moore of FanGraphs notes that A's reliever Brian Fuentes could be available. His contract (due $10.5 million through 2012) is a strong reason to say no, though.

Here are today's draft notes: The Crawfish Boxes has scouting reports on two players that have been listed in connection with the Brewers: UConn outfielder George Springer and LSU outfielder Mikie Mahtook. Amazin' Avenue has a comparison of the two players.

The Brewer attendance remains high this season, setting a pretty impressive baseline: Tom Tango of The Book Blog estimates the Brewers' base attendance at 26,437, which is roughly comparable to what the Milwaukee Braves averaged (adjusted for era).

Here's another reminder of what you're missing if you're not checking out our comments section: Nullacct has released another archive of his latest photoshops. Here's my favorite from this batch: 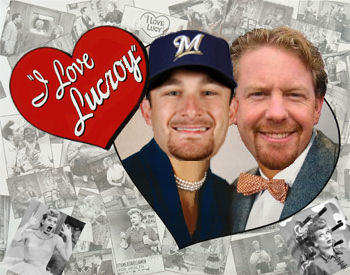 Jake Fox is struggling this season, hitting .188/.250/.396 in 19 games before being DFA'd. It's worth noting, though, that if the Brewers are looking to add some pop off the bench he'd be a significant upgrade over Mark Kotsay.

The Brewers missed an opportunity to gain a game in the standings last night, as the Cardinals lost to the Giants 7-5 in 11 innings. The final pitch of the game was delayed for 16 minutes due to a bank of lights going out. You know about that and much more if you've read this morning's edition of Around The NL Central.

The Angels had yesterday's scariest moment: Their plane had to make an emergency landing after experiencing some trouble with its hydraulic equipment. Thankfully, no one was injured.

Here's something else to use to kill some time this morning, if you're so inclined: Sporcle would like you to name at least one of the players that have accomplished 31 rare baseball feats. I got 27. (h/t Lone Star Ball)

Now, if you'll excuse me, I need to watch for traps.