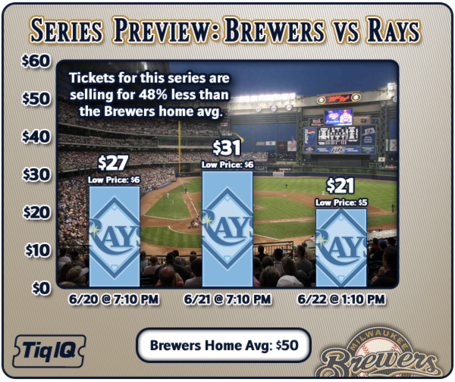 Click here to see available tickets via BCB and TiqIQ.

Steve Slowinski of DRaysBay was kind enough to take a few moments to answer some questions about the Rays in advance of tonight's series opener:

KL: The Brewers are scheduled to face Jeff Niemann tonight, making his first start since the first week in May. What's kept him on the shelf this long, and what are the Rays expecting from him tonight?

SS: Niemann hit the DL with a stiff back, but I'm pretty sure that wasn't the only reason the Rays sent him to the DL: he's also just pitched poorly since around July of last season. He's an odd pitcher: while he's 6'9", he doesn't have overpowering stuff and instead relies on mixing his pitches and hitting his spots to get batters out. He had trouble early this season with his location, missing high in the zone frequently (which would point to a back issue, one would think), so hopefully he's gotten those issues all figured out. I'm really tired of watching a crappy Jeff Niemann try and gut through an outing -- if he doesn't show much improvement soon, I'm going to be banging the "Alex Cobb for #5 Starter" drum loud.

KL: At first glance, the Rays offense doesn't look like much. Is their .310 team OBP (entering play Sunday) roughly what we should expect this week, or is there reason to believe the bats will turn around?

SS: Nope, that's about right. The Rays' offense has not been terribly strong so far this year, and it's been helped along by some timely streaks. Sam Fuld had a crazy hot streak that propelled the Rays early in the year, Matt Joyce was on fire up until a few weeks ago, and Casey Kotchman has been hitting like "woh" for the past month and a half. But the truth of the matter is that this team doesn't have a very strong lineup. Sam Fuld, Elliot Johnson, Reid Brignac, Sean Rodriguez, John Jaso, Kelly Shoppach -- these players all have some offensive upside (some more than others), but they're far from a collection of offensive stars.

That said, the Rays have enough offense to get by with their above average pitching staff. Longo, Zobrist, Damon, and Joyce form a strong heart of the order, and that will only get better once Longoria and Joyce break out of their recent slides. We're not about to bludgeon anyone with our offense, but it gets the job done.
KL: This is only the Rays' second road interleague series of the season and by my calculation, Jeff Niemann, David Price and Jeremy Hellickson have a combined 22 career plate appearances and two hits (both of which belong to Price). How will the shift from AL to NL baseball affect the Rays?
SS: In past years, I'd have said not at all -- the Rays have had pitiful DHs over the past few seasons, to the point where it probably wouldn't have mattered if we just let our pitchers hit instead. I exaggerate slightly, but still, a .238 batting average out of our DH hole last year really stunk.
This season, the Rays have actually been getting decent production from the DH for once. Even though the whole Manny thing didn't work out, Johnny Damon has been a welcome addition to the club and his .274/.323/.423 slashline has been loads better than almost any DH in Rays history (/sad but true facts). But he'll move to left field for interleague, shifting Sam Fuld and has .639 OPS to the bench. The Rays' defense will suffer slightly, but Fuld's bat is nothing special -- he's ideally a fourth outfielder anyway.
KL: The Brewers are no strangers to weak-hitting shortstops, but Reid Brignac is hitting even less than Yuniesky Betancourt and somehow still playing most days. Do the Rays have other options at the position or is Brignac the horse they're going to keep riding?
SS: Brignac's offense has been putrid this season, but the Rays are going with him for a couple reasons. 1) His defense is pretty outstanding and he makes up for some of his offensive shortcomings with his range. 2) His bat has upside, even though it hasn't shown through in the majors yet. This is a reloading year for the Rays anyway, and the Rays might as well give him time to adjust to major-league pitching so they know what they have in him going forward.
And 3) There aren't too many other options. All of a sudden, the Rays have a crazy amount of depth at shortstop in the minors; they drafted about 90 shortstops in the first few rounds of the draft, and Hak-Ju Lee and Tim Beckham are both having insane years so far. But none of these players are close to being major-league ready; Beckham is probably the closest, but even he's only in Double-A and a couple years away from being ready. The Rays have tried sliding Elliot Johnson and Sean Rodriguez over to short on occasion -- and I think they'll do it more going forward -- but neither of them are long-term answers for the position. For now, we just have to suck it up and hope that Briggy improves at the plate.

KL: The Rays are coming off a three game sweep of the Marlins and were Edwin Rodriguez's last opponent before he resigned as Florida's manager. Some of my readers would probably be ok with it if the Rays could convince Ron Roenicke to do the same. Are they up to the challenge?

SS: Just as long as you don't try and poach Joe Maddon, definitely! I feel incredibly spoiled that the Rays have Maddon as their manager -- I don't know what it's like anymore to bemoan every decision coming from the bench.

Thanks again to Steve for taking the time. Be sure to check out more of his work over at DRaysBay.