Series Preview #27: Talking Yankees With It's About The Money

Share All sharing options for: Series Preview #27: Talking Yankees With It's About The Money 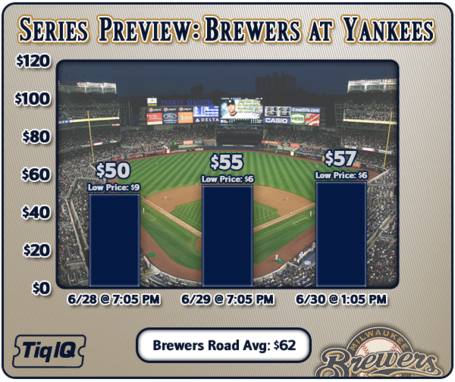 As always, visit the Brew Crew Ball/TiqIQ page for more information on tickets for this week's games.

With the Brewers and Yankees scheduled to open a three game set tonight, we took a few moments this week to chat with Brien Jackson of It's About The Money. Here's what he had to say about the Yankees and this week's series.

KL: The Yankees will enter play on Tuesday at 45-31, winners of eleven of their last 15 and 8 of 12 interleague games. What's the secret to their recent hot streak?

BJ: None of those games were against the Red Sox. Really, there's no secret to it, they're just playing very well these days. Curtis Granderson is producing like an MVP, the middle of the order is very solid at the plate, and Jorge Posada and Nick Swisher are finally starting to hit. It's a very dangerous lineup top to bottom, and the pitching hasn't been too shabby either.

KL: Baseball Reference has Yankee Stadium's park factor at 106 for hitters and 103 for pitchers. That's pretty high but down significantly from 113 and 111 in 2010. Did something change to keep baseballs from flying out with such frequency, or should we expect offense to pick up again now that the weather is getting warm?

BJ: Honestly I don't know. The Yankees have hit a bunch of home runs this year, so I don't think that's it. The park does suppress doubles and triples though, and with the downturn in offense maybe it's just playing a little more even this season. But really, I have no idea.

KL: Because of the magic of ESPN most baseball fans are well aware of Derek Jeter's injuries and Jorge Posada's slow start. I haven't seen much coverage, however, of Curtis Granderson, and he entered play Sunday leading the team with a .940 OPS. What's he brought to this team and do you expect it to continue?

BJ: Since hitting coach Kevin Long modified his swing last August, Granderson has been nothing short of an elite player. He's been their best hitter for most of the season, he's crushing the ball against right-handed pitching and lefties, and he's adding terrific defense in centerfield on top of it. If not for Jose Bautista, he'd be the clear MVP of the American League thus far. He may still be, depending on how heavily you weight team performance in the matter.

Can it continue? I don't see why not. At this point we have an obvious watershed moment with the swing change and a clear, sustained turnaround after that. Granderson is in the prime years of his career, and he's been an All-Star in the past. So yes, I think Granderson can continue to play at an elite level.

KL: The last probable pitching matchups I've seen for this week have CC Sabathia scheduled to go in the series finale on Thursday. How's he been this season, and do you have any update on the possibility he could opt out of his contract when the year is over?

There aren't any reliable reports regarding the opt-out clause, mostly because C.C. has been pretty vague about the matter, but I just can't see him not exercising it. He'd be the best pitcher on the market by a wide margin, and the Yankees have a huge need for him. In other words, he'd be leaving a lot of money on the table by not opting out. My guess is he opts out and the Yankees give him an extra couple of years on a new contract. Something like 6 years, $140 million.

KL: I saw highlights on Sunday of David Cone giving up a home run to Tino Martinez on Old Timers Day. Any chance the Yankees could be convinced to slot him into a starting spot this week?

Thanks to Brien for taking the time, and be sure to check out It's About The Money for more on the Yankees.