Share All sharing options for: Series Preview #31: Brewers' Best Games Against the Rockies 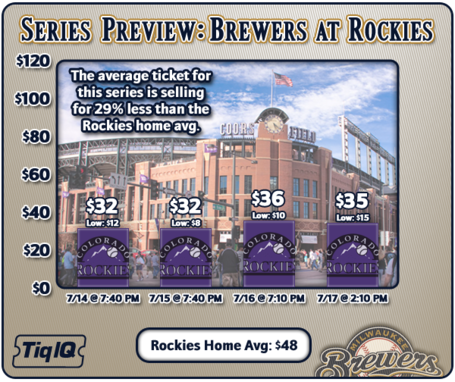 For more on available tickets, check out the BCB/TiqIQ page.

We've already talked to Purple Row once this season, so it's time to take a look at Brewer hitters' and pitchers' best performances against the Rockies. As always, these games are sorted by WPA.

This top performance comes despite a 7-6 loss to the Rockies. Barker went 3-4 with 2 RBI and a run scored. He had two doubles in the game.

Alex Ochoa entered this game in the eighth inning as a defensive replacement in left field. Even though he was in the game just a short time, he made it count. He went 1-for-1 with a walk, a run scored and an RBI. His walk in the ninth loaded the bases for Mark Loretta, whose single ended the game in walk-off fashion with the Brewers winning 7-6

You'll remember this not-so-distant game as the one where the Brewers had a night get-away day from San Diego and all got home sometime after 5 am. The game was 14 innings long and Prince won it on a walk-off home run. Prince was just 2-for-7 that night, be he made it count when his two-run 14th inning home run gave the Brewers the 7-6 win.

In his two starts prior to this game, Chris Capuano had struggled with his command, giving up nine runs. But on this night, he was the star. He pitched seven innings of shut-out baseball will also driving in the Brewers' two runs. He allowed six hits and no walks while getting eight strikeouts.

After dropping the first two games of the series to the Rockies, Ned Yost's Brewers were desperate for a win. Leading 3-2 in the eighth, they took no chances and asked closer Salomon Torres to get the final five outs of the game. Torres was also key in getting Brad Hawpe out at home in the eighth inning, which would have tied the game.

Starting pitcher Jeff D'Amico took the team into the ninth inning with a 3-1 lead, but proceeded to give up a run when he let the first three batters of the inning reach. Curt Leskanic entered the game with no outs and two men on base and managed to get out of the jam by inducing a pop-up, a fly out and a ground out. Brewers won 3-2.