Share All sharing options for: Series Preview #32: Brewers' Best Games Against the Diamondbacks 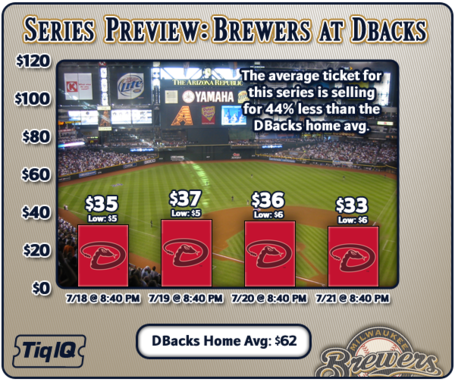 To check out available tickets, visit the BCB/TiqIQ page.

We've already talked to AZ Snake Pit once this season, so it's time to take a look at Brewer hitters' and pitchers' best performances against the Diamondbacks. As always, these games are sorted by WPA.

This one should be fresh in Brewers' fans memories. Casey McGehee, who was benched while struggling at the plate, came in to pinch hit in the 7th inning and launched a three-run home run to put the Brewers up 3-1 and give them the win.

The Brewers ended up losing this game in 15 innings, but they would have never gotten the chance to play extras if it weren't for the ninth-inning pinch-hit two-run home run by Kieschnick. Prior to his home run, the Brewers were 0-20 in pinch-hit opportunities on the season.

Pinch-hit home runs are the name of the hitters game here, as Marquis Grissom launched an eighth-inning, three-run shot to put the Brewers up 6-5 and eventually win the game.

The Brewers and Diamondbacks were tied and headed into extra innings when the Brewers brought in their closer, Wickman. He threw two shut-out innings, giving up one hit and striking out two. The Brewers put up one run in the 11th and Wickman got the win.

Jeff D'Amico pitched 8 2/3 of six-hit, three-run ball. He did it in just 98 pitches. He struck out five and walked one.