Share All sharing options for: Series Preview #33: Brewers' Best Games Against The Giants 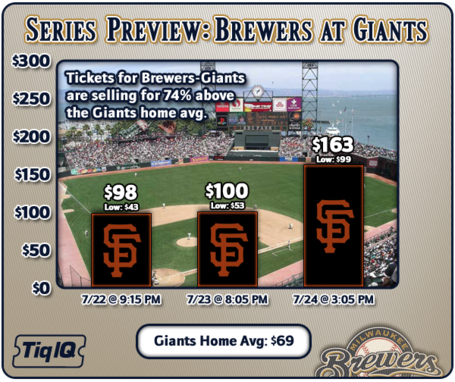 For more on available tickets (what few there are, anyway), visit the BCB/TiqIQ page.

This is the second and final meeting between the Crew and the 2010 World Champions this season, so it's time to look at the Brewers' best performances against the Giants. We'll start with the pitchers this time, and as usual all performances are sorted by WPA.

It'd be understandable if the 2002 Brewers were a dark stain you're trying to wash off of your memory. The Brewers entered play on this day at 54-100, already having clinched the only triple-digit loss season in franchise history, and sent a lineup to the plate at Miller Park that included such standouts as Ryan Christenson, Jeffrey Hammonds, Jim Rushford and Jorge Fabregas. But they had Ben Sheets, and that was almost enough.

Sheets pitched eight innings on this day and held the Giants to just one run on three hits, walking two and striking out six. Perhaps even more improbably, he also drew a walk (one of just four that season) and scored the Brewers' only run.

Unfortunately, it wasn't enough. Sheets was lifted for a pinch hitter in the bottom of the eighth and Luis Vizcaino allowed two runs in the ninth to give the Giants a 3-1 win.

I'm not sure why this seems to happen, but it seems like every time I write one of these posts I end up talking about a great Brewer performance in front of a tiny crowd. Despite the fact that the Giants were only a game and a half out of first place on this day, they drew just 10,662 fans to a Tuesday afternoon contest at 3Com Park.

The fans who did show up got to see one of the best performances of Scott Karl's major league career. He held the Giants to a run on eight hits over eight innings, walking two and striking out just one. Mark Loretta had four hits and three RBI in the game as the Brewers won 5-1.

As it turns out, the best Brewer pitching performance against the Giants came in their most recent trip to AT&T Park.

The Brewers didn't have much to play for on this day as they entered play 67-78 and were all but mathematically eliminated from postseason contention, sitting in fourth place in the Central. The Giants, meanwhile, were 83-64 and were only half a game ahead in the NL West.

None of that mattered to Randy Wolf, who pitched a complete game, three hit shutout, walking just two and striking out six. Ryan Braun had a pair of doubles and scored twice as the Brewers won 3-0.

And now, the hitters:

Cirillo had 15 three hit games in 1998 (including three four hit games and a five hit game), but none were bigger by WPA than this one.

Cirillo didn't really get his day started until the sixth inning, when he singled up the middle and was stranded. He singled again in the eighth and was on base when Jeromy Burnitz's sac fly allowed the Brewers to tie the game at two. After a tenth inning walk, Cirillo doubled in the twelfth to drive the potential game-winning run (catcher Bobby Hughes) to third base. Three batters later, Marquis Grissom hit a walkoff single.

The Brewers had given up lone runs to the Giants in the top of the second and sixth, and entered the seventh down 2-0. They showed some signs of life in the inning, though, as Luis Lopez walked, Richie Sexson singled, Jeromy Burnitz drove in a run with another single and Hammonds, who was 0-for-2 at this point, hit a three run home run to give the Brewers a 4-2 lead.

Hammonds was also at the plate in the bottom of the eighth when three runs scored on an E7, icing a 7-4 victory for the Crew.

Most of you probably remember a moment involving Prince Fielder and the Giants in 2009. Surprisingly, this isn't that game. Before he shocked the baseball world with the "bomb" celebration following a September walkoff, Fielder also beat them at Miller Park on this day.

The Brewers scored seven runs on this day and Fielder was responsible for the first three, homering off Barry Zito as the first of back-to-back shots (Casey McGehee had the other) that turned a 4-0 deficit into a 4-4 tie.

The Giants scored two in the top of the ninth off Trevor Hoffman and brought in Brian Wilson to pitch the bottom half, but he couldn't hold the lead on this day. A Craig Counsell single, Mat Gamel walk and singles from Corey Hart and J.J. Hardy tied the game and set the stage for Fielder once again, who doubled to right to drive home Hart with the game winning run.