Here's a quick look at available tickets for this homestand: 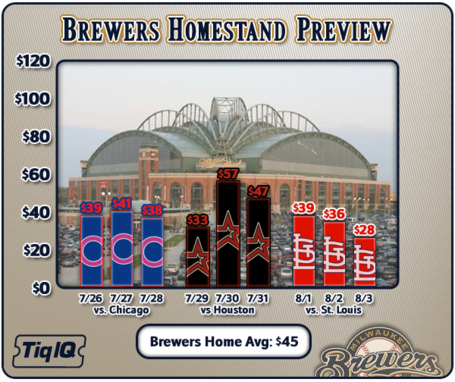 As always, you can find more information regarding those tickets on the BCB/TiqIQ page.

This is the third meeting between these two teams in 2011, so it's time to take a look at the best performances by Brewer pitchers. As always, these games are sorted by WPA.

It's nice to remember a positive moment from the early 2000's, isn't it? They don't come along often.

The 2003 Brewers entered this game in fifth place, 12 games back in the NL Central and left the same way but at least they were able to take a game from the Cubs, who were still fighting for the division lead. Doug Davis had a great game on this day, shutting out the Cubs at Wrigley for 8.1 innings while allowing just five hits and two walks, striking out five.

His WPA score for this game would probably be higher if he hadn't been removed after allowing a hit with one out in the ninth. Dan Kolb came in to record the final two outs in a 2-0 Brewer win. Scott Podsednik was on base four times (three hits and a walk) and scored a run.

The Brewers had fallen behind 4-0 early on this day, but rallied to tie the game at four in the eighth behind home runs from J.J. Hardy and Prince Fielder. With a tie game in the bottom of the eighth, Ned Yost turned to Carlos Villanueva to keep things close and he was about as good as one could have hoped for. He escaped a two on, two out situation in the eighth, retired the side in order in the ninth, pitched out of trouble again in the tenth, laid down a sac bunt in the top of the eleventh and held the Cubs scoreless again in the bottom half. All told, he pitched four scoreless innings in relief, allowing the Brewers to pick up a win when Prince Fielder homered in the 12th.

There's one "wait, what?" moment on nearly every one of these lists. Quevedo, who was also one of the Brewers' best pitchers against the Padres, is that moment on this list.

Quevedo, a former Cub, was pitching his only full season in the majors in 2002 and was on the only real hot streak of his major league career: He had allowed just three earned runs while pitching seven innings or more in each of his previous four starts, good for a 0.88 ERA. And on this day he stayed hot against his former team.

On a Wednesday afternoon at Miller Park Quevedo pitched eight scoreless innings, allowing just three hits and striking out eleven while walking none. He's easily the most unlikely of the ten pitchers in franchise history who have struck out eleven or more without giving up a free pass.

Unfortunately, as was typically the case with Quevedo, something went wrong on the way to the buffet. The Brewers only scored one run on his behalf, and three Brewer relievers combined to allow five runs in the ninth and tenth innings to give the Cubs a 5-1 win.

If you're a frequent reader of these posts, you might notice that Chris Capuano shows up a lot. Despite the fact that we've only done "best pitcher games against (team)" a handful of times, this is Capuano's fourth appearance. (He pitched one of the Brewers' best games against the Rockies, Reds and Nationals too.)

This was actually the best of those four games. On a July night at Miller Park, Capuano held the Cubs to just six hits, walked none and struck out three, pitching a complete game shutout. He also outdueled Greg Maddux, who at that point already had 318 career wins. Rickie Weeks and Geoff Jenkins had RBI hits in the fifth inning to give the Crew a 2-0 win.

The win was the second of two complete game shutouts for Capuano against the Cubs in 2006. They were the only two shutouts of his career.

If you skipped this game, you can probably be forgiven. The two teams entered play this day a combined 29 games under .500, over 30 games out of first place in the NL Central before the All Star break. Only the woeful Astros (who lost on this day to drop to 27-53) stood between these two teams and last place in a division the Cardinals were running away with.

With that said, 37,176 fans showed up at County Stadium on a Saturday night anyway and got to witness a great pitching performance by Jeff D'Amico. He was making his first start in nearly a month and just his sixth since injuries had cost him all of the 1998 and 1999 seasons. On this day he needed just 89 pitches to shut out the Cubs for eight innings, allowing just two hits and a walk while striking out four.

The Brewers scored a run in the fourth on Charlie Hayes' RBI single and three more in the eighth on a Geoff Jenkins triple and wild pitch to win 4-0.