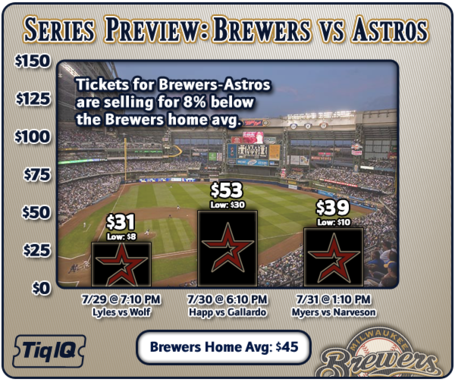 Click the picture or this link for more information regarding tickets to this series.

This is the third meeting between these two teams, so it's time to look at Brewer pitchers' best performances against the Astros.

Rigdon has already been mentioned here once today: He was the starting pitcher on Bob Wickman All Star Poster Night. This game was a more positive experience...but ended with a similar result.

Rigdon kept the Astros quiet for seven innings, allowing just three hits and three walks while striking out a season-high six. Unfortunately, the Brewers couldn't push any runs across against Jose Lima and lost 3-0 when the Astros scored all their runs in the ninth against Curtis Leskanic. Jose Lima pitched eight shutout innings in his final win as an Astro.

Actually, I was lying about the happier memories. This one is another tough luck loss.

Like Rigdon, Davis pitched seven shutout innings in this game. He allowed just five hits and two walks, striking out eight. Also like Rigdon, though, he got no support. This game went into the tenth inning before Mike Adams allowed the game's only run to score on a Craig Biggio sac fly.

Strangely enough, this one was a loss too.

And finally, a win.

Just like the three games listed above this was a seven inning shutout performance for Davis, allowing two hits and five walks while striking out seven. This time, however, the Brewers gave him some run support: They scored one time in the first inning on a Lyle Overbay groundout against Roy Oswalt.

Given that one run (and two more in the eighth), Davis, Jorge de la Rosa and Derrick Turnbow held on for the victory.

A few months after Davis' best game, Ben Sheets one-upped him. Facing the Astros at Minute Maid Park, he pitched one of his 18 career complete games and brought home a 3-2 Brewer victory.

He allowed two runs on eight hits in the game, walking none and striking out eight. The Brewers scored the winning run in the seventh on a Geoff Jenkins home run and Sheets took it from there, needing just ten batters to get the final nine outs.

Unfortunately, in August Sheets' 2005 season was already almost over. He made one more start against the Braves before being shut down for the rest of the year.