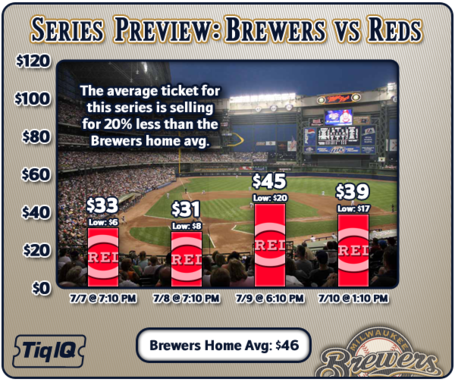 For more information on available tickets, visit the BCB/TiqIQ page.

The Brewers and Reds open a series tonight for the third time this season, so it's time to take a look at the best games by Brewer pitchers against our friends from Cincinnati. As always, these games are sorted by WPA.

Glover's performance in this game was pretty impressive, but this stat might be even more so: Despite the fact that he has a career 5.03 ERA, Glover somehow managed to make 263 career major league appearances over eight seasons. 19 of those appearances and 14 of his career 47 starts came as a Brewer in 2004 and 2005. This game was easily the best of those 19.

Glover was excellent on this day, holding the Reds to just two hits over seven innings while walking just one and striking out a career-high ten. The Brewers got a pinch hit RBI single from Jeff Cirillo, an RBI triple from Brady Clark and two scoreless innings of bullpen work from Jose Capellan, Julio Santana and Derrick Turnbow in the 2-0 victory.

Tomo Ohka came to the Brewers in 2005 as part of a deal that sent second baseman Junior Spivey to Washington and had two relatively serviceable seasons in Milwaukee (4.55 ERA over 40 appearances). This start in 2006 was only his second after spending two months on the DL with a strained rotator cuff.

His performance on this day might lead you to wonder if he should have strained it more often. Ohka held the Reds to one run (a Brandon Phillips solo shot) on just three hits over eight innings, walking one and striking out seven. The Brewers, meanwhile, cobbled together nine singles and won the game 4-1.

If you read the note above on Ohka's game, then this one will sound familiar. Sheets was out nearly three months in 2006 with shoulder tendonitis, and this was his second start back as a member of the rotation. On this day, though, Sheets was excellent.

The Brewers scored a run for Sheets in the first inning, then three more in the seventh and through eight it looked like that would be great plenty, as he was shutting out the Reds on just four hits and had struck out ten. In the top of the ninth, however, the wheels started to come off. Sheets allowed a leadoff single to Adam Dunn and a two run homer to Ken Griffey before being lifted, and Derrick Turnbow gave up another homer to Rich Aurilia to bring the Reds within one. Cincinnati went on to send three batters to the plate with the tying run on base in the inning, but Francisco Cordero recorded the final out in a 4-3 victory.

Kevin Mench was the offensive hero in this game, going 3-for-4 with a homer and driving in all of the Brewer runs.

A year to the day after the Ohka game listed above, Capuano pitched a gem of his own. In one of the lone bright spots in a season that saw him go 5-12 with a 5.10 ERA, Capuano held the Reds to a run on seven hits over eight innings. He walked none and struck out seven in the game.

Unfortunately, he was outdueled on the day. Aaron Harang started for the Reds and pitched ten innings, allowing a run (a Ryan Braun solo shot) on seven hits, walking none and striking out ten. While Capuano was worth +.454 WPA for his team, Harang was worth +.747 for the Reds, their highest single game total since 1988.

The game was still 1-1 in the bottom of the 12th when Javier Valentin scored Norris Hopper with a walkoff single off Grant Balfour.

This game was one of the great and memorable moments in the career of possibly the greatest in-season acquisition in Brewer history. The Brewers entered play on this day as losers of four of their last six and six games back of the NL Central lead, sitting in third place. In the final game before the All Star break, though, CC Sabathia took the team on his back and earned a big win.

Sabathia pitched a complete game on this day, one of his seven in 17 starts as a Brewer, and held the Reds to two runs on eight hits with a walk and nine strikeouts. He also drove home the Brewers' first run with a solo homer off Reds starter Homer Bailey in the third inning.

The Brewers won the game 3-2 on a pinch-hit walkoff sac fly by Craig Counsell with no one out in the ninth.