On Bad Karma And (Hopefully) Atonement

Share All sharing options for: On Bad Karma And (Hopefully) Atonement

Longtime readers of the site could probably make a laundry list of regrettable things I've said over the years. Here's a perfect example: In January of 2009, the Brewers were doing their usual routine of saying they were done shopping while actually not being done. Braden Looper was one of the more notable pitchers left on the market, and in the Mug on January 6 here's what I said:

I've been holding back on saying this for a while, but it seems like the time has come to make my final offer: If the Brewers sign Braden Looper, I will buy a Looper jersey.

Of course, a few weeks later the Brewers signed Looper. I'm not sure if I was a factor in that decision.

There was a problem, though: I was broke. My last "day job" had evaporated a few months earlier, and my wife and I were in the middle of planning both a wedding and a move at the same time. I never expected the Brewers to actually sign Looper, and when they did I didn't exactly have the cash on hand to make an immediate jersey purchase. So I listed it as a low priority and left it on a "to do someday" list.

Looper, of course, had one relatively poor season as a Brewer before going unsigned for 2010. So my opportunity to buy a jersey passed. Finally, when the Brewers had their Clubhouse sale this offseason, I was able to acquire this: 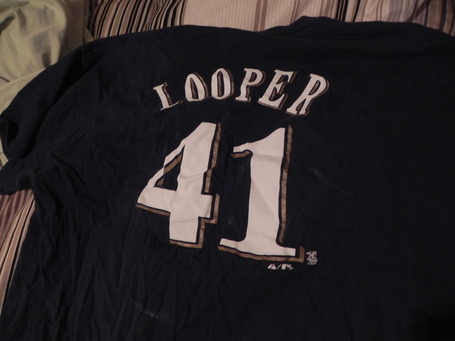 You might not be able to smell it from here, but the shirt reeks of bad karma.

Fast forward to this week. My wife and I were headed to Milwaukee for a pair of Brewer games on Monday and Tuesday. While packing in a hurry, I grabbed a Brewer shirt and tossed it into my suitcase. I thought it was the Braun shirt. It wasn't. It was this one.

Driving home after the game, I knew what had to be done.

I think I'll let the pictures tell the rest of the story: 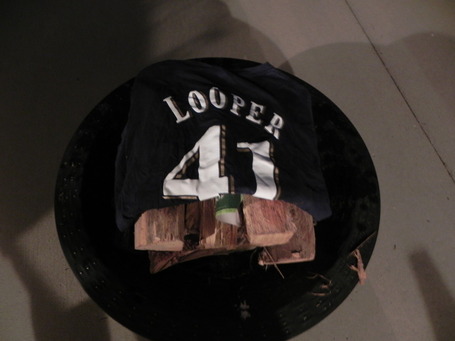 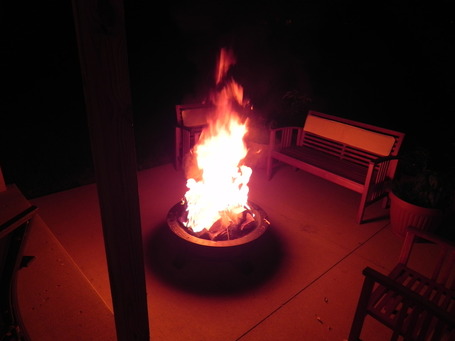 This was done Wednesday night, and the Brewers are 2-0 since. Hopefully the bad karma is gone now.