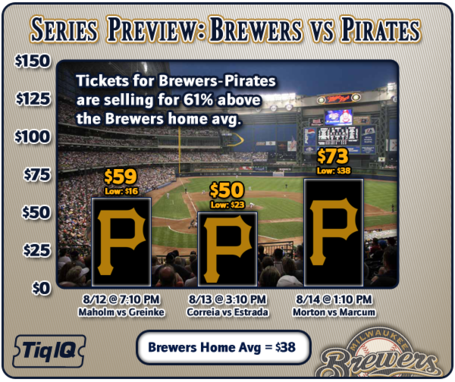 For more on available tickets for this weekend's series, check out the BCB/TiqIQ page.

This is the third meeting between these two teams, so it's time to look at Brewer pitchers' best performances against the Pirates. As always, these games are sorted by WPA:

Our lone relief appearance on this list comes from a pretty unlikely source. Guillermo Mota had a reputation for being something of a gas can. He had come over in a trade from the Mets: New York was so eager to be rid of his contract that they traded him for Johnny Estrada, then non-tendered Estrada.

On this day, though, Mota was the hero. The Brewers and Pirates were tied at three in the 12th, and Carlos Villanueva had walked the bases loaded with no one out when Mota was summoned. He retired Brandon Moss with a fly ball, Chris Gomez with a strikeout and Luis Rivas with a ground ball to end the threat, and J.J. Hardy hit a walkoff single in the bottom half of the inning to give the Brewers a 4-3 victory.

This one was a pretty impressive tightrope walk.

On a Saturday night at PNC Park the Brewers scored a run in the fourth inning on John Vander Wal's RBI double off Jeff D'Amico, then put the bats away for the night. Thankfully, Ben Sheets was up to the challenge. He held the Pirates scoreless for seven innings on seven hits, walking none and striking out seven.

Dan Kolb pitched the final two innings to record his first Brewer save in the shutout victory.

The 2000 Brewers and Pirates had team ERAs of 4.63 and 4.94, respectively, so this Tuesday night game at Three Rivers Stadium is the last place one would've expected a pitchers' duel to break out. Yet somehow, it did.

Jeff D'Amico pitched nine innings on this night, allowing one run (a Pat Meares solo homer) on five hits with a walk and three strikeouts. Yet he was matched pitch-for-pitch by Kris Benson, who also allowed just one run (a Tyler Houston solo homer) on seven hits, walking one and striking out nine.

Neither pitcher factored in the decision as the game went eleven innings. The Brewers scored three in the top of the eleventh on Jose Hernandez's single and Tyler Houston's suicide squeeze, and Bob Wickman pitched the bottom half for the save.

If you saw Jamey Wright as a Brewer, then you might find it hard to believe that he was going to become a guy who pitched 16 major league seasons. With that said, he pitched two of his three career complete game shutouts as a Brewer and this was one of them.

Wright held the Pirates to just three hits and four walks on this day, striking out four while keeping the Pirates off the board. The Brewers scored single runs on Jeffrey Hammonds' eighth inning double and Paul Bako's ninth inning single to take the 2-0 victory.

Obviously we're all hoping for more, but don't be surprised if this turns out to be the best all-around game of Gallardo's career.

Gallardo was masterful on this night, holding the Pirates scoreless for eight innings with just two hits and a walk, striking out eleven. And with the game still scoreless in the seventh, he hit a solo home run off Ian Snell to power the Brewers to a 1-0 victory. Carlos Villanueva pitched a perfect ninth for the save.