Share All sharing options for: Series Preview #40: Brewer Hitters' and Pitchers' Best Games Against The Dodgers 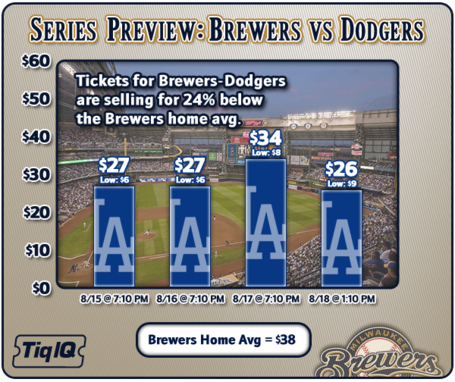 For more on available tickets for this series, check out the BCB/TiqIQ page.

This is the second meeting between these two teams, so it's time to look at Brewer hitters' and pitchers' best performances against the Dodgers. As always, these games are sorted by WPA:

Facing the Dodgers, whom they hadn't beat all season, and coasting down an 11-game losing streak, the Brewers received a boost from Jeromy Burnitz.

Burnitz gave the Brewers a 2-0 lead in the second with his first home run and tied the game at three in the seventh with another home run.

Mark Loretta won the game for the Brewers with a single in the ninth.

Ouch. The recap of this game points out that the Brewers were the worst team in baseball heading into this game.

The Brewers were down 5-0 heading into the bottom of the seventh and then exploded for eight runs, capped by Geoff Jenkins three-run home run. Jenkins actually lead off the inning with a double to start the Brewers rally.

Following off-season shoulder surgery, Jenkins had suffered from a lack of power this season, making the home run that much more special.

In this game, J.J. Hardy was both the offensive powerhouse and the defensive goat. After hitting a go-ahead two-run home run in the eighth, Hardy committed an error in the field in the ninth that led to the Dodgers' tying run.

But he wasn't done and he atoned for his mistake. After Ray Durham hit a single and stole second (!) in the 10th inning, Hardy singled him in to give the team the lead. David Riske struck out Manny Ramirez for the third out in the bottom of the 10th for the save.

Scott Karl went six strong innings, giving up just three hits and striking out seven on the Brewers' way to a 6-1 win over the Dodgers.

A flare up of Ben Sheets' inner-ear issues meant that he couldn't pitch and the Brewers needed someone to fill his spot in the rotation. Doug Davis, pitching on just three days' rest, stepped up and pitched six shut-out innings.

He got into trouble a few times, including loading up the bases in the third, but got Andre Beltre to ground out to end the threat.

Davis' game could have been thrown off when Milton Bradley threw one of his patented temper-tantrums. Davis wasn't allowed to throw warm-up pitches or be on the field while the shenanigans happened in the sixth.

But the craziness didn't effect Davis, who gave up a lead-off single, but then induced a double-play and a flyout to get out of the sixth.

Cal Eldred pitched seven scoreless innings, giving up five hits while walking one and striking out four. He allowed a runner to get past second just once in the seven innings.

He had his best stuff, getting 18 strikes looking called and throwing 63 of his 98 pitches for strikes.