Share All sharing options for: Series Preview #41: Brewers' Best Games Against The Mets 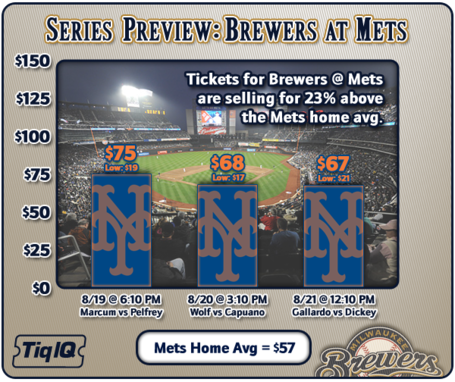 Click the image above or this link for more information on available tickets from the BCB/TiqIQ page.

This is the second and final meeting between these two teams in 2011, so it's time to take a look at Brewers' best individual performances against the Mets. All games are sorted by WPA. First, the hitters:

This was, by WPA at least, Grissom's second best game in a very forgettable run in Milwaukee.

It was supposed to be a very big deal when Grissom was acquired from the Indians before the 1998 season, but by this point in 1999 he had more or less concreted his status as a disappointment. Grissom entered play on this day batting just .217/.272/.318 in his second season as a Brewer, but improved his OPS by 35 points with his performance in this game.

The Brewers were trailing 2-1 in the eighth inning at Shea Stadium when Brian Banks and Jeromy Burnitz led off the inning with back-to-back singles. The rally seemed to stall there as Jeff Cirillo and David Nilsson struck out swinging for the inning's first two outs, but Grissom had other plans: He hit a home run down the left field line to score three and give the Brewers an eventual 4-2 victory.

If you made a list of the top 25 Brewer performances against the Mets, Jenkins would show up on it four times. This was his best performance, as he powered the Brewer offense in a slugfest.

Jenkins started his attack in the first, hitting a home run as the second half of back-to-back shots with Carlos Lee to give the Crew a 3-0 lead. The Brewers actually hit four home runs in the game's first two innings, as Russell Branyan and Damian Miller went back-to-back to lead off the second. After two frames at Shea Stadium the Crew led 6-2.

Unfortunately, they would need more. The Mets rallied in the seventh to tie the game at 7, setting the stage for Jenkins once again: His second solo homer, this one in the ninth, gave the Crew back the lead.

Sadly, they blew the lead in the bottom of the inning and lost 9-8 on Mike Piazza's walkoff walk in the eleventh.

This multi-homer game had a happier ending.

This game got off to a relatively quiet start, as the Brewers led the Mets 2-1 heading into the eighth inning on Fielder's fourth inning home run. All hell broke loose in the top of the eighth, though, as the Mets scored five runs to jump ahead 6-2. The Brewers, as they've frequently done at home this season, bounced right back and responded with four in their half of the inning to tie it. Fielder's second two run homer of the day erased the deficit.

The two teams remained tied headed into the bottom of the ninth, when Nyjer Morgan's walkoff double scored Craig Counsell and gave the Brewers a 7-6 lead.

Coffey made 156 appearances as a Brewer over three seasons but recorded just two saves. This was one of them, and it'd be a tough one to top.

The Brewers were protecting a 3-1 lead in the bottom of the seventh at Citi Field when the wheels started to come off a bit. Four of the inning's first five batters had reached against Jeff Suppan, Mitch Stetter and Mark DiFelice, driving in a run and leaving the Mets with the bases loaded, one out and a one run margin. Todd Coffey entered the game and induced a 1-2-3 double play on the second pitch, ending the threat.

After that, the rest seemed almost anticlimactic: Coffey allowed a walk and a single but pitched two more scoreless innings to close out a 4-2 Brewer victory.

If you remember Jeff D'Amico pitching any good games as a Brewer, odds are they came during the 2000 season.

After missing all but one game of the 1999 season D'Amico bounced back and had the best year of his career in the new millenium, posting a 2.66 ERA over 23 starts. In this game he shut out the Mets for eight innings, holding them to four hits and a walk while striking out a career high ten.

Unfortunately, the Brewer bats didn't do much to help him: They managed just one unearned against Mets pitcher Mike Hampton. Curtis Leskanic gave that run back in the ninth inning and the Mets won the game in the tenth on a Jay Payton walkoff homer.

This win was one of several in September that helped the Mets clinch the NL Wild Card. They went on to make the World Series.

I've been to more than a handful of games at Miller Park in recent years: I was there for Trevor Hoffman's 600th save, Shaun Marcum's grand slam and a handful of other memorable moments. I was also fortunate enough to be there (invited to serve as a responsible adult at my cousin's birthday party) to see this game, which turned out to be Yovani Gallardo's first complete game shutout.

Gallardo, matched up against Johan Santana, kept the Mets scoreless on eight hits and a walk, striking out seven. The Brewers also couldn't solve Santana, however, so the game went into the bottom of the ninth scoreless. Ryan Braun was on base with two outs when Corey Hart hit his tenth home run of the year, a walkoff shot to left to give the Brewers a 2-0 victory.

Here are the MLB.com highlights of Gallardo's performance: