Editor's note: Due to the tight schedule today, this post is both a series preview and today's game preview post. 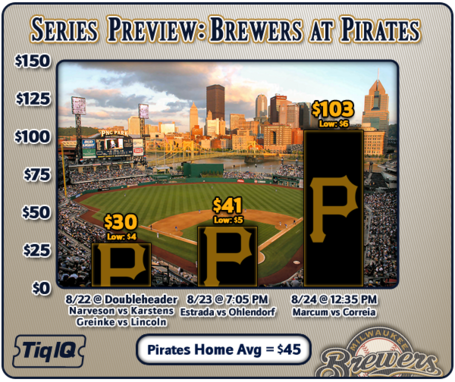 For more information on available tickets in this series, check out the BCB/TiqIQ page.

Today is probably going to be the most interesting day of this 17 game, 16 day stretch as the Brewers and Pirates play a pair at PNC Park.

In game one, our old friend Jeff Karstens (3.12 ERA, 4.38 FIP) will be on the mound for the Pirates. Karstens is having easily the best year of his career: He's already set a new high for innings with 141.1 and this is his only full major league season where his ERA has been under four. He's also showing some pretty impressive control, walking just 1.7 batters per nine innings. He faced the Cardinals on Tuesday and allowed three runs on six hits in 5.1 innings, walking two and striking out five.

The home run ball has been Karstens' nemesis over the course of his career: He allows about 1.3 per nine innings and 12.8% of fly balls hit off of him this season have left the ballpark. He won't strike many batters out, though, as his 5.41 K per nine innings this season is a career high. He throws a high 80's fastball but nearly half of his pitches will be either sliders (16.9% of all pitches), curves (14.5%) or changeups (13%). FanGraphs has the curve as his best pitch this season at +2.29 runs per 100.

This is the second time Karstens has faced the Brewers in 2011: On May 14 he picked up the loss as the Brewers scored two runs against him on five hits over five innings. Prince Fielder and Brandon Boggs took him deep in that game. Five Brewers have faced him ten times or more:

Karstens will face Chris Narveson (4.49 ERA, 3.78 FIP), and if you know what to expect from him today you should tell the rest of us. He's making his first start since August 6, coming off a 15 day stint on the DL with a laceration on his left thumb. He didn't go on a rehab assignment and has only pitched one bullpen session since, so it's tough to tell how long the Brewers will let him go today. He's thrown 87, 86, 85 and 84 pitches in his last four starts, so I guess all signs point towards him throwing 83 today.

2010 was something of a breakout year for Narveson, but 2011 has been even better. His 3.78 FIP is a career low and his 1.7 fWAR has already tied a career high with over a month of the season remaining. A large portion of that improvement can be attributed to the fact that his home run rate has gone significantly down this season, from 1.34 in 2009 and 1.13 in 2010 to 0.88 per nine innings this season. He's also throwing his changeup a lot more (over a third of the time), and it's been his best pitch statistically.

Narveson faced Jeff Karstens on May 14 and was the winning pitcher, allowing a run on five hits over six innings with four walks and five strikeouts. Four current Pirates have faced him ten times or more:

Here's the lineup in game one:

And the bullpen situation:

It should be a beautiful day for baseball today, with temps in the low 70's dropping back into the 60's as the evening goes along.

Follow the jump for the pitching matchup for game two.

After a break for orange wedges and juice boxes, Brad Lincoln (5.40 ERA, 4.13 FIP) will make just his second major league start of 2011 in game two. Lincoln is 26 and a former #4 overall pick, and he's spent most of the season posting a 4.19 ERA in nineteen starts for AAA Indianapolis. Like Karstens, control seems to be his biggest asset: He's walking just 1.7 per nine innings in the minors while striking out 7.6. Lincoln pitched in relief on Friday, allowing a run on a hit and a walk to the Reds in 0.2 innings of work.

Lincoln hasn't thrown more than 40 pitches in a game since being recalled to the big leagues on August 7, so it remains to be seen how long the Pirates will let him pitch today. He has a low-to-mid 90's fastball with a curve and changeup that have both been above average in a relatively small big league sample size.

Lincoln is facing the Brewers for the first time in 2011 but was roughed up in two starts against them last year, allowing a combined ten runs on 16 hits over 8.1 innings.  George Kottaras, Ryan Braun and Jim Edmonds took him deep in those games. No Brewers have faced him ten times or more.

He'll face Zack Greinke (3.92 ERA, 2.92 FIP), making his first start since pushing his ERA under four for the first time this season. It was all the way up to 5.66 on July 3 but he's allowed just ten earned runs in 53.1 innings since to bring it back down to this point. He was very good against the Dodgers on Wednesday, allowing a run on five hits over seven innings with three walks and eight strikeouts.

The Brewers have won seven of Greinke's last eight appearances, and it's not hard to figure out why: He's holding opposing batters to a .212/.273/.332 line over that time, and striking out about 10.5 batters per nine. He's thrown at least six innings in nine straight starts and seven or more in each of his last three.

This is Greinke's third start against the Pirates, and results from the first two have been a little mixed. He was very good against them on August 12, holding them to two runs on six hits over 7.2 innings. Back on May 15 he was not as strong, allowing five runs on six hits over five innings. He's struck out a combined 14 while walking two in the two games. Ryan Ludwick (.000/.083/.000) and Andrew McCutchen (.200/.200/.500) are the only Pirates that have faced him ten times.