Share All sharing options for: Series Preview #43: Brewers' Worst Games Against The Cubs 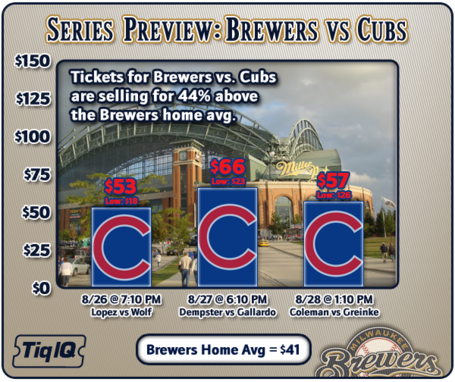 For more on available tickets for these games and more, check out the BCB/TiqIQ page.

This is the fourth meeting between these two teams this season, so it's time to remember some of the more painful moments in the history of this rivalry. As always, games are sorted by WPA. Starting with the hitters:

Hall only got one shot at the Cubs in this game, but it was a big one and he came up short.

The Cubs took a 2-1 lead in the first inning and held it most of the day, with the two teams trading runs in the sixth but Chicago maintaining the advantage. The Brewers came through in the ninth, however, scoring a run to send the game to extra innings.

The game probably should have ended in the tenth: A double and two walks loaded the bases with one out and brought Bill Hall to the plate, plnch hitting for pitcher Gary Glover. Hall, however, lined into a double play at first base and ended the threat. The Brewers went on to score three runs in the 12th and win 6-3.

This game is tied for the sixth longest in Brewer history as the two teams played 17 innings at Miller Park, and Richie Sexson didn't have a hit all day.

Both teams managed just one run in regulation as Ben Sheets and Kerry Wood locked up in a pitchers' duel. Both teams scored a run in the tenth but that was it until the 17th, when the Cubs plated two for the victory.

Sexson, batting third, was one of just two Brewer starting position players without a hit in the game. He struck out in five of his seven plate appearances and left runners on base in the third, sixth, 13th and 15th.

Amazingly enough, the top (or bottom, depending on how you look at it) two performances against the Cubs came in the same game.

While Sexson struggled in the #3 spot, John Vander Wal was hitting two spots behind him and wasn't much better. He went 1-for-7 on the day and was caught stealing after his lone single. He came to the plate with runners on but stranded them in both the 11th and 13th innings.

After joining the Brewers in late July, Cordero pitched two months before blowing his first save with the team. This was that game.

Cordero was called upon to protect a 2-1 lead in the ninth and blew it on the first pitch, giving up a home run to pinch hitter Freddie Bynum. Five batters later he gave up a walkoff single to Henry Blanco in a 3-2 loss.

This was an even more egregious blown save: The Brewers had scored five in the first and carried a 5-3 lead into the ninth when Cordero was called upon to close out what should have been career victory #2 for Yovani Gallardo.

Instead, Cordero allowed hits to three of the five batters he faced The final one was a walkoff homer for Aramis Ramirez in a 6-5 loss.

By WPA, this is the tenth worst pitching outing in franchise history.

This was a ridiculously wild day at Wrigley Field, as the Brewers had scored eight in the third inning to take an 8-2 lead only to watch it trickle away. They led 12-10 heading into the bottom of the ninth, and sent Bob Wickman into the game to close it out.

Wickman faced six batters and retired just one on a Gary Gaetti sac bunt. The other five had four singles and a home run as the Cubs scored five in the inning for a 15-12 walkoff victory.