Series Preview #44: Reviewing the Brewers/Cards Series So Far This Season

Share All sharing options for: Series Preview #44: Reviewing the Brewers/Cards Series So Far This Season 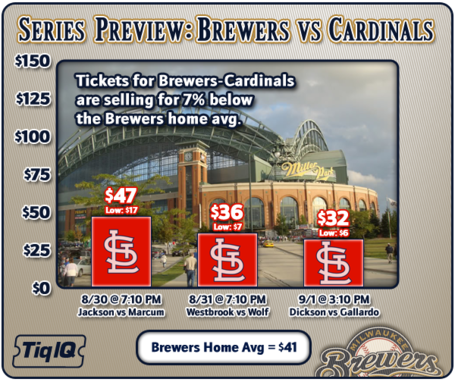 For more on available tickets for this series, visit the BCB/TiqIQ page.

Since the Brewers and Cardinals play six series this season, we had to get a little creative on how to cover these last two series previews. Today we'll be looking back at how the matchups have gone for these two teams so far this season.

It's hard to remember that in early May, the Brewers were in the middle of a offensive slump. Jaime Garcia dominated the Brewers in a two-hit shut-out and gave the Brewers their seventh loss in a row. The Brewers didn't have a baserunner or a hit until the eighth inning.

This is the game where Yovani Gallardo borrowed Marco Estrada's short pants and matched Jaime Garcia's appearance from the night before. Gallardo didn't allow a hit until the eighth inning. Carlos Gomez, Mark Kotsay and Gallardo himself each made spectacular catches to keep the game scoreless and Gallardo's gem intact.

On this forgettable road trip, the Brewers hit .103 with runners in scoring position. The only reason they weren't shut out on Sunday was a Craig Counsell infield hit after a 13-pitch at-bat. At one point, Kyle McClellan retired 13 Brewers in a row. Luckily, this was the end of the Brewers' troubles - this game seemed to be the spark the Brewers needed. They went on to go 24-8 over the next 32 games.

You won't remember it because of his late-season slump, but this is the game where Craig Counsell had three hits and scored three runs - one on a safety squeeze. It was also the game where Chris Narveson saved his own butt from possibly falling out of the rotation - he had allowed 15 earned runs in 12 2/3 innings over his previous three starts. To redeem himself, he pitched eight scoreless innings and even put down the bunt that scored Counsell. This was also the game where the concession stand started on fire and the stadium was smoky for the last third of the game.

The annual Cerveceros day brought ugly urine-colored jerseys as well as seven strong innings from Zach Greinke and a four-run sixth inning to give the Brewers the lead. The win dropped the Cardinals' lead over the Brewers to a 1/2 game, meaning that Sunday's game would be for the NL Central lead. Greinke also lead off the sixth innings offensive output with a single and was driven in on Weeks' homerun.

On Zach Greinke bobblehead day, it was another four-run sixth, this time lead by a Prince Fielder 440ft homerun, that sunk the Cardinals and gave the Brewers a half-game lead in the NL Central. It was Fielder's eighth homerun int he past 10 games. Shaun Marcum continued his strong pitching, notching his 10th quality start in 14 tries. The Cardinals had held the top spot in the NL Central for just under a month.

Big innings seem to be the thing that have carried the Brewers through these games against this Cardinals - this time it was a five-run fifth that did in St. Louis and their starter Chris Carpenter. The scoring was capped by a Nyjer Morgan bases-clearing double. The win put the Brewers ahead of the Cards 3 1/2 games in the division. It also gave the Brewers, who had been building an amazing home record, their 40th win at home on the season - which ties the team's number of home wins all of last season.

You'll remember this one as the game after Tony LaRussa complained about the lighting in Miller Park and accused the Brewers of cheating. It was also the game in which Yadier Molina seemingly inexplicably went nuts after a called strike three and was quickly tossed from the game. He would earn a five-game suspension for his spitting and bumping the ump. It was also the plunk-a-thon hearbreaking loss in 11 innings. There was a lot going on surrounding this game. It was also the game where the Brewers had three chances to get Albert Pujols out, including a play at the plate, but he scored, extending the inning and allowing pitcher Jaime Garcia to hit a three-run home run. Saito pitched up and in to Pujols in the seventh, angering LaRussa, who threw at Ryan Braun not once, but twice in the next inning. The Brewers then loaded the bases with no outs that inning and failed to score. After the game, LaRussa fanned flames more by referring to Brewers fans as "idiots."

The mini-resurgence of Casey McGehee put the Cardinals 3.5 games back in the division. McGehee hit three home runs in this game and gave the credit to a kid he had met prior to the game. With a short start Friday and extra innings on Saturday, St. Louis' bullpen was short, so they left Edwin Jackson in for seven innings of 10-run shellacking.

This 10th inning win gave the Brewers a four-game lead over the Cardinals in the NL Central - at the time, the biggest lead anyone had had in the division all season. Corey Hart, who had say out some games due to a bone bruise, hit a two-run home run. The bullpen pitched four-innings of scoreless relief and John Axford got his 30th consecutive save.

Randy Wolf pitched eight innings of one-run ball, leaving it to John Axford to shut down the Cardinals once again. Jake Westbrook also went eight strong, but the Brewers were able to get to him early, before he pitched five shut-out innings. Prince Fielder had a pair of RBI. Brewers pitchers have somehow managed to keep the prolific St. Louis offense down all season.

Though they had improved greatly on the road, this game made you wonder if maybe the woes away from home were about to return. The defense committed two errors and the offense had three inning-ending double plays in this loss. They couldn't seem to get it together and Albert Pujols, who'd struggled so much against the Brewers earlier in the season, went 4-for-4, hitting his first homer against the Crew all season. Gallardo was scattered and only lasted five innings.