Share All sharing options for: Series Preview #37: Brewers' Worst Games Against The Astros 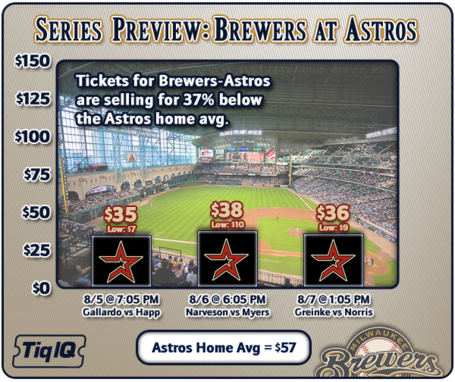 To get tickets or for more information on what's available, visit the BCB/TiqIQ page.

This is the fourth meeting between these two teams, so it's time to look back at Brewers' worst games against the Astros. As usual, these games are sorted by WPA and we'll start with the hitters:

The 2005 Astros were on their way to a World Series appearance, but you wouldn't have guessed it when they entered play 17-31 on a Sunday afternoon in Milwaukee. On this day they rode six scoreless innings from Andy Pettitte and an Eric Bruntlett triple to a 2-1 win.

Damian Miller was the Brewers' #5 hitter on this day and went 0-for-4. His strikeouts ended the Brewer first and fourth innings, and he grounded into a double play in the ninth to end the game.

Here's a name you probably haven't heard in a while: The only Brewer run in this game scored on an eighth inning homer by Chris Magruder.

As bad games go, this was a truly special performance.

This game looked like a slugfest early, as the Brewers and Astros scored a combined nine runs in the first four innings. Both teams settled down from there, though, and combined to score just two more runs over the final eleven frames of a 6-5, 16 inning Brewer win. The walkoff victory came on a Henry Blanco sac fly, scoring Marquis Grissom.

The Brewers picked up the win despite getting no help from first baseman Kevin Barker, who batted fourth and contributed the only 0-for-8 performance in Brewer history*. He was the only Brewer starter who didn't reach base and one of just two without a hit: Jeromy Burnitz went 0-for-5 with three walks, and two of them were intentional free passes to get to Barker.

These eight hitless at bats came in the middle of an 0-for-21 slump that eventually ended Barker's Brewer career.

This was a more traditional poor performance.

The Astros nickel-and-dimed the Brewers to death on this day, scoring individual runs in five innings en route to a 5-4 victory. The Brewers scored two in the eighth to keep it close, but couldn't quite get over the hump despite the fact that their #2-4 hitters (Junior Spivey, Geoff Jenkins and Lyle Overbay went a combined 7-for-10 and were on base eleven times.

Keith Ginter batted fifth and spent most of the day leaving them on base. His groundout with runners on second and third ended the first inning. His bases-loaded double play ended the third. He struck out with the bases loaded and none out in the seventh, then did it again with runners on first and third to end the eighth. His sixth inning sac bunt was his only offensive contribution in the game. He also committed an error on the day.

All told, this was pretty easily the worst day in a somewhat underrated Brewer career for Ginter, who posted a .257/.344/.448 line over three seasons in Milwaukee.

And now, the pitchers:

This game could have been a pretty significant triumph for a pretty bad 2003 team. They had entered the ninth inning trailing 4-3 but rallied against Astros closer Billy Wagner, tying the game on Eric Young's solo home run and taking a 5-4 lead when Wes Helms was hit by a pitch with the bases loaded.

Unfortunately, Mike DeJean only needed one batter to erase the advantage as he allowed Geoff Blum to hit a game-tying solo home run leading off the ninth. The game went to extra innings and DeJean allowed a leadoff double to Morgan Ensberg in the 10th, who eventually came around to score on Gregg Zaun's sac fly.

This was one of DeJean's final save opportunities as a member of the Brewers: He went 2-for-4 over the next month and a half before being traded to the Cardinals.

This game is a similar story to the one above, but with a better result. In this one, the Brewers scored five unanswered runs to carry a 6-4 lead into the bottom of the eighth, when Todd Coffey took the mound. He retired the first two batters he faced but melted down from there, allowing four straight hits and three runs. Kazuo Matsui had the final one: a double that scored catcher J.R. Towles and outfielder Darin Erstad to give the Astros the lead.

Thankfully, the Brewers weren't done. They scored two in the top of the ninth on a Ryan Braun home run to retake the lead, and (after another blown save by Carlos Villanueva) scored again on Braun's single in the top of the eleventh to take a 9-8 victory.

I think we often forget that Matt Wise had a pretty good extended run as a valuable middle reliever for the Brewers. Claimed off waivers before the 2004 season, Wise posted a 3.93 ERA over 175 games in his first four seasons in Milwaukee, walking 71 and striking out 162 over 215 innings. This day, however, was not his best work.

Wise entered the game in the bottom of the seventh to protect a 6-3 Brewer lead and did anything but, allowing five runs (four earned) on four hits. It was a pretty classic Yosting: The first four batters to face Wise all reached but Ned Yost left him in to face outfielder Jason Lane, whose three run home run more or less sealed the Brewers' fate.

The Crew scored a run in the eighth to close the gap but lost the game 8-7.