Share All sharing options for: Series Preview #38: Brewers' Worst Games Against The Cardinals 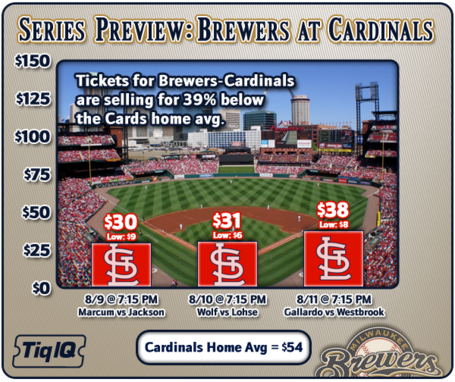 Check out the BCB/TiqIQ page for more on available tickets for this series.

This is the fourth meeting between these two teams, so it's time to look back at Brewers' worst games against the Cardinals. As usual, these games are sorted by WPA and we'll start with the hitters:

Maybe Tyler Houston can blame his poor hitting game on the fact that he moved all over the diamond defensively that day. He started at third, moved to first and ended the game at catcher.

However, he came to bat down by one run in the eighth with the bases loaded and hit into a double-play to end the inning.

The Brewers ended up winning 4-3 in 10, but Houston had a rough day at the plate.

Ryan Braun was out of the lineup, the Cardinals pitched around Prince Fielder and the rest of the Brewers lineup was unable to make anything happen in this game. Bill Hall was especially bad.

He started his day by hitting into a double-play after Fielder was walked in the second. With two on in the fourth, Hall struck out. Joe Dillion and Fielder got in ahead of him in the sixth and he once again hit into a double-play.

In the eighth, the Cardinals once-again walked Fielder and Hall obliged them by striking out.

Corey Hart's lucky no one remember his poor performance in this game because Ryan Braun went four-for-four with a go-ahead ninth-inning home run. Despite Braun's theatrics, Hart had a rough day at the plate. Luckily, the Brewers still won 4-3.

With two on in the first, he grounded out to the shortstop. In the fourth, with two on and no outs, Hart hit into a double-play.

One highlight of the day for Hart was that his Fielder's Choice in the fifth led to an RBI.

With Braun and Fielder on in the seventh, Hart hit into another double-play, this time ending the inning. After a ninth-inning Fielder double and a one-run lead, Hart popped out to second base.

This was Trevor Hoffman's third save opportunity of the young 2010 season. He walked Colby Rasmus to start off the inning before getting Yadier Molina and David Freese to fly out.

Next up to bat was Nick Stavinoha, who was getting his first at-bat of the season. Stavinoha wasn't exactly a prolific hitter, with just 31 hits as a mid-season call-up over the past two seasons.

Hoffman had Stavinoha down 1-2 before Stavinoha put the pitch in the left-field bleachers, winning the game 5-4 for the Cardinals.

The Brewers entered the eighth inning with an 8-5 lead. Reliever Chad Fox had pitched a perfect seventh, but then gave up three hits to load the bases. Manager Phil Garner went to the bullpen for Mike Myers.

Myers promptly gave up the grand slam, giving the Cardinals the 9-8 lead. Garner left Myers in to face the next batter, who happened to be Mark McGwire. Myers gave up the home run to McGwire, too. Myers faced two batters and gave up five runs before leaving the game having recorded no outs.

Cordero gave up a one-out double to Chris Duncan. Albert Pujols' single scored Duncan. He got Jose Encarnacion to ground out for the second out, but then gave up back-to-back to Scott Rolen and Ryan Ludwick to give up the walk-off in the bottom of the ninth, 7-6.

The night was ruined for Manny Parra, who went six strong in his first career start.

It was Cordero's fifth blown save of the season - all of them came on the road. He had blown the save a few days before this, making this his second-consecutive blown save and loss.