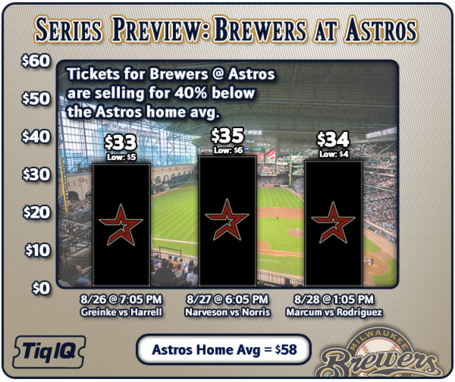 For more on available tickets for this series, visit the BCB/TiqIQ page.

This is 2011's last series between these two teams, so it's time to talk to Crawfish Boxes about the season that was for the Astros and what the future holds for this franchise. David Coleman was kind enough to answer questions for us.

KL: What, if anything, can you tell us about Lucas Harrell, scheduled to start on Friday?

DC: Harrell was grabbed off waivers from the Chicago White Sox earlier this year. At the time, most of the Astros cognoscenti thought that meant J.A. Happ was on the way out of the rotation and Harrell would be plugged in. That never happened and Harrell became Triple-A depth. He doesn't have overpowering stuff, but put up good enough numbers in limited time with Oklahoma City that fans have been clamoring to see more of him for about a month now. Against the Brewers, he's likely to give up some runs, but I think he has enough potential to warrant sticking around for a while.

KL: Obviously, the relevant part of the season is over for the Astros now and has been for some time. What are your goals for this team for the month of September? What are you looking forward to?

DC: Being so far gone just means you can appreciate the little things in a baseball season. Like every time Henry Sosa defies the odds and pitches well in the majors. Or every at-bat by everyone's favorite Jose Altuve, all 5-foot-7 of him. (You're right to be skeptical of that height. Everyone agrees he's closer to 5-5). You appreciate the RBI machine that is J.D. Martinez, a 20th-round draft pick that flew up the system and made it to the majors despite never getting much love from Baseball America.

It's been a tough year, but with so much youth on this team, at least we get to watch the future of the Astros, instead of Carlos Lee all day every day.

KL: Most national baseball fans are probably at least vaguely familiar with the Astros ownership situation: Jim Crane and a group of investors are set to buy the team, but MLB is holding up the transaction at present. What can you tell us about the situation, and what are your thoughts on Crane as a potential owner?

DC: It's bad news for Crane right now. If you read the tea leaves right, there has been a dramatic shift in the behind-the-scenes situation in recent weeks. Where we've all been assuming Crane would be approved eventually based on outgoing owner Drayton McLane's friendship with Bud Selig, it appears things are not that golden. In fact, Selig even told McLane not to hold that press conference back in May announcing the sale because there were so many questions around Crane.

His misdeeds are many. He has a checkered past with EEOC complaints against women and minorities while he was running Eagle Global Logistics. He also may have jacked up the price on goods he sold to the armed forces, hence the war profiteering charge. He also backed out of a handshake agreement to buy the Astros in 2008 and dived into the Rangers bankruptcy mess with Mark Cuban last year, both no-nos to the rest of baseball's owners. In short, he's made no friends. None of the claims here are enough to get his sale blocked, but add all that to his debt service on the deal (roughly half the $680 million is being borrowed), and Crane is not a rubber-stamped new owner. In fact, I think this new Chinese bid for the Dodgers has a better chance of being approved than Crane at this point. Communists. Before Crane. That's how bad this is.

KL: What does the ownership situation mean for the team headed into this offseason?

DC: Well, it can't be good. McLane basically checked out of the day-to-day operations after the sale was announced and has turned his attention to getting a new football stadium built for the Baylor Bears. That left GM Ed Wade to consult largely with Crane on all the fire-sale(ish) trades at the deadline. If Crane isn't approved (and he might not be until November), then I imagine we'll see very little in terms of roster moves for Houston. If Crane does come on as owner, I think at least two of the pitchers get moved and Carlos Lee might get cut.

KL: What are your expectations for this team going forward? When does the window of opportunity for them to contend open next?

DC: That all depends on how Martinez, Altuve, Jimmy Paredes and Jordan Lyles develop. They are the next wave of talent. If these guys all stick, Houston could contend by 2013 or 2014. If they falter and it takes the next wave of talent from the system (George Springer, Jonathan Singleton, Jarred Cosart), that pushes the date back to 2016 or 2017 easily.

My expectations have been suitably lowered to "Just don't embarrass yourselves."

Thanks again to David for taking the time, and don't forget to check out Crawfish Boxes for more on the Astros!