Share All sharing options for: Series Preview #47: Talking Phillies With The Good Phight 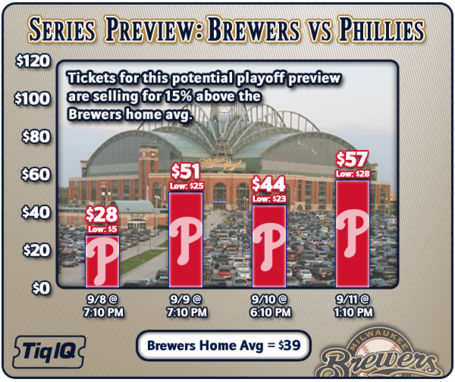 For more on available tickets for this series, check out the BCB/TiqIQ page.

Thanks to WholeCamels of The Good Phight for taking the time to answer some questions leading up to this series.

KL: Is it World Series or Bust for this team at this point? Given the prospects traded and the money spent to put this team together, would anything less than a long playoff run be a disappointment?

WC: That's probably a fair statement now, but you really have to keep in mind the "crapshoot" nature of the playoffs. If this team makes it to 100 victories, which appears likely at this point, it'd be really unfair to look back at this season as anything but a phenomenal success, Championship or not. Winning that many games is really, really difficult. Now the team just needs to capstone.

KL: Entering play today the Phillies are 91-48, had nearly locked up the NL East and had the league's best record by 7.5 games. Did this team really need to trade away two top 100 prospects to add Hunter Pence?

WC: I really fall in the middle on this issue. I'm not averse to trading prospects. I like Jarred Cosart and Jonathan Singleton (and player to be named later Domingo Santana), but I wasn't completely infatuated with them.

My main issue with the trade at the time was Pence himself, who is a fine player and a really likeable guy, but as you implied with your question, this team was almost definitely playoff-bound regardless. And Pence improves your chances of winning in the postseason by a very small amount.

On the other hand, the front office may have been trying to buy Domonic Brown some time to develop, to heal from his February hamate fracture and surgery, and to learn left field.

In any event, an outfield of Brown, Shane Victorino, and Hunter Pence in 2012 looks pretty good.

KL: Brewer fans will be seeing Vance Worley for the first time on Sunday. What can you tell us about him?

WC: He's been a great surprise, and while no one reasonable expects him to maintain this level of success, it's not like he's been succeeding solely with smoke and mirrors. His strikeout and walk rates are more than adequate for a quality major league starting pitcher, and it's unquantifiable, but he has a good attitude and isn't afraid to throw strikes. His BABIP allowed is low (.277), but not phenomenally so. He's not going to be a sub-3.00 ERA pitcher in the long run, but I like him to slot in as a solid back-of-the-rotation guy for the next few years.

Nice fastball, good two-seamer that he runs away from left-handed hitters as a strikeout pitch, good breaking ball.

KL: If the season ended today the Phillies would face the Diamondbacks in the NLDS. Is that the matchup you'd prefer, or would you move things around given the chance?

WC: See the previous "crapshoot" comments. I honestly think that, given the injuries to the Braves (who the Phillies could not play in the NLDS anyway), the Brewers are the best remaining team (aside from the Phillies, of course), so it's always preferable to face the weaker team first. However, short playoff series are very weird, anything can happen, and the Diamondbacks could easily surprise. I'm not assuming anything!

KL: What's your opinion on pitchers as contenders for the MVP? Does Roy Halladay deserve consideration? Do any other Phillies?

WC: Unless and until the guidelines explicitly state that pitchers are ineligible for the Award, they should be given due consideration along with position players. Depending on your faith in fWAR, Halladay leads all National League pitchers and position players. There are other considerations, of course, and I actually enjoy the fact that the Award gives voters some gray area; if the Award went to the Guy with the Highest WAR, then that wouldn't be very interesting.

And really, I can give or take the Awards. Prince Fielder and Ryan Braun are worthy candidates.

On the position player side for the Phillies, Shane Victorino is having a career year, posting 6.3 fWAR to date (tied with Braun for fifth in the National League), despite a recent cool stretch. His great play has done a lot to make up for Chase Utley's missed time and the decline in production from a few other positions.

Thanks again to WholeCamels for taking the time, and remember to check out The Good Phight for more on the series.