Today we're kicking off a new occasional feature taking a deeper look at former Brewers I've pulled out of a stack of old baseball cards.

PROGRAMMING NOTE: After over 500 installments spanning two seasons and a full offseason, there are some days where I've exhausted all of the available content for Today In Brewer History. Brewers A-Z is a supplemental feature to help fill in the gaps in my historical calendar. - KL

Jim Adduci was the Cardinals' seventh round pick in the 1980 draft, but appeared in just ten games in St. Louis (all in 1983) before being traded to the Brewers in a minor deal. Being traded to Milwaukee changed the scenery but not the circumstances for Adduci, who still spent most of the 1984-87 seasons in the minors in the Brewer organization. The lone exceptions were a three game stint with the Crew in 1986 and a journey to Japan in 1987.

Adduci's MLB career was short but it was enough to get him a baseball card, pictured here. Adduci was #495 in Donruss' 1987 set: 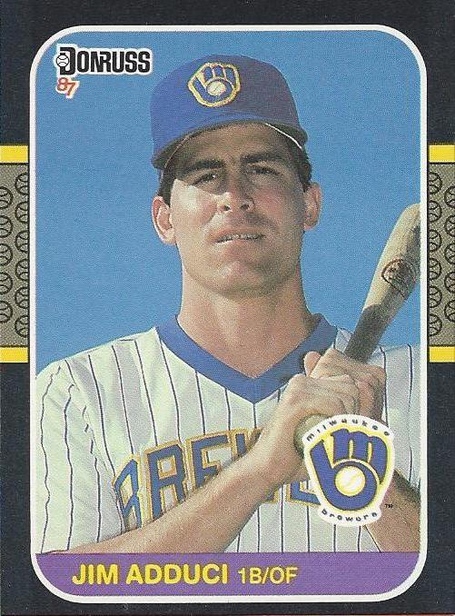 Today is also the anniversary of Game 1 of the 1991 World Series, where the Braves beat the Twins in their first World Series game since leaving Milwaukee. We covered that event in Today In Brewer History last year.