The 1987-89 Brewer is the subject of the latest installment in our new occasional feature taking a deeper look at former Brewers I've pulled out of a stack of old baseball cards.

PROGRAMMING NOTE: After over 500 installments spanning two seasons and a full offseason, there are some days where I've exhausted all of the available content for Today In Brewer History. Brewers A-Z is a supplemental feature to help fill in the gaps in my historical calendar. - KL

Pitcher Jay Aldrich was the Brewers' tenth round pick (261st overall) in the 1982 June draft, and when he reached the big leagues in 1987 he became one of just three players from Montclair (NJ) State University ever to reach the majors. He made 31 relief appearances for the Crew in his debut season, posting a 4.94 ERA but striking out just 22 over 58.1 innings.

That was enough to convince Donruss to make Aldrich part of their 1988 set. Here he is as card #460: 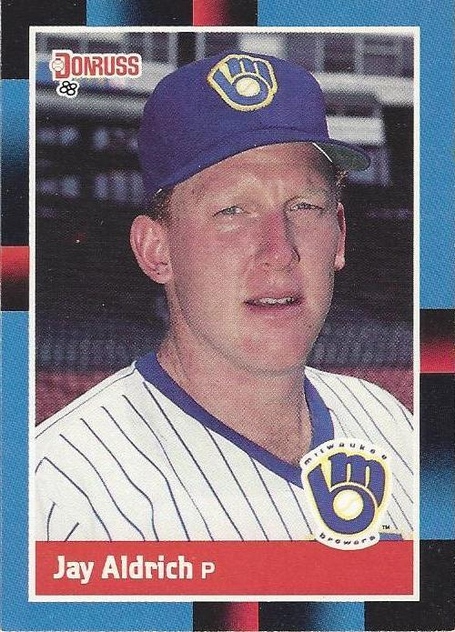 The Brewers, however, sent Aldrich back to AAA Denver in 1988, and he didn't pitch in the big leagues again until making 17 relief appearances for the Crew in 1989. All told Aldrich pitched three major league seasons as a member of three teams, posting a 4.72 ERA over 62 games.