Bernard only made 57 career appearances as a Brewer, but his 1982 performances won't soon be forgotten.

Right handed pitcher Dwight Vern Bernard was a second round pick for the Mets in 1974 out of Belmont University, and reached the big leagues for the first time for New York in 1978. The Mets dealt him to Milwaukee following the 1979 season, but Bernard pitched just eight games as a Brewer over the next two years.

Two of those games, however, came in the Brewers' 1981 ALDS series against the Yankees. Bernard faced seven batters in that series and retired them all. Opportunity knocked again for Bernard in 1982 and he answered it in a big way, appearing in 47 games in relief for the eventual American League champions with a 3.76 ERA over 79 innings and allowing just four home runs. Bernard made two more playoff appearances in 1982, and worked two more perfect innings.

That was enough for Donruss, who made Bernard card #28 in their 1983 set and allowed him to show the bottom of his cleat to the world: 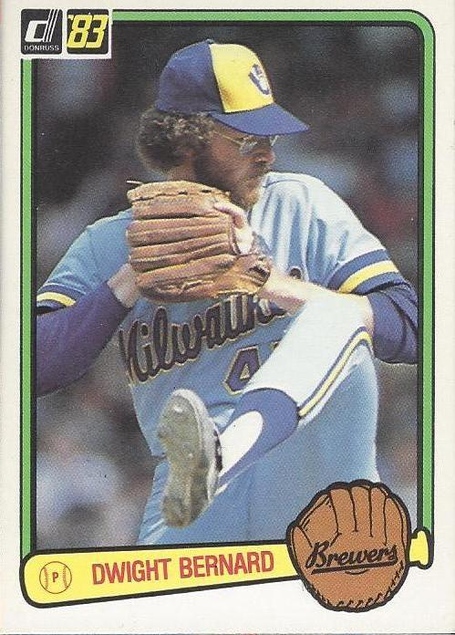 The Brewers, however, released Bernard near the end of spring training and he never pitched in the majors again.

With help from the B-Ref Play Index, happy birthday today to West Bend, Wisconsin native and UW-Stevens Point alum Scott May, who turns 52. May was a member of the 1988 Rangers and 1991 Cubs.

Today is also the 14th anniversary of the Brewers releasing first baseman Bob Hamelin, ending the 1994 AL Rookie of the Year's major league career. We covered that event in this space last year.