Bamberger may not have been the Brewers' winningest manager, but he was one of the most memorable.

By 1946, George Bamberger had already seen more than most of us ever will. The 22-year-old pitcher got a late start to his professional baseball career after spending several years in the army during World War II, but signed with the Giants as an amateur free agent and still spent 18 years as a player.

Bamberger pitched in nearly 600 professional games in his career but just ten as a major leaguer. He retired from playing following the 1963 season, his tenth in AAA and his third as part of the Milwaukee Braves organization. He was already coaching during his last few years in the minors and by 1968 he had worked his way up to the majors in that capacity, spending his first of nine seasons as the Orioles' pitching coach.

Bamberger's first managerial job at any level was with the 1978 Brewers, who won 93 games. He guided the Brewers to 95 more wins in 1979 before being forced to step away from the team following a heart attack during spring training. He returned later that year to manage 92 more games, but left the team again before the season was over.

After a brief stint with the Mets Bamberger again returned to the Brewers but had less success, guiding the team to a combined 142-171 record in 1985 and 1986. He's the fourth winningest manager in franchise history, and among skippers who managed at least one full season only Harvey Kuenn (.576), Ron Roenicke (.552) and Buck Rodgers (.549) have a better career winning percentage. 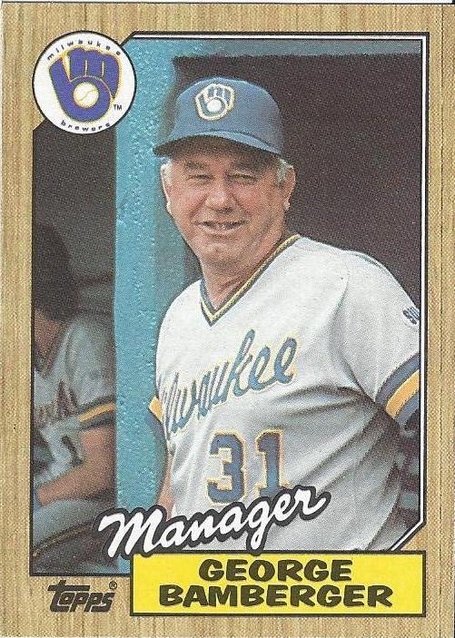 The back of the card, interestingly enough, says Bamberger was a switch hitter. He hit .130/.210/.155 over slightly more than 1000 at bats in the minors. B-Ref lists him as a right handed hitter.

Today is also the anniversary of the Brewers hiring Davey Lopes as manager in 1999. We covered that event in Today In Brewer History last year.