Not all top prospects turn out to be major league contributors, but Kevin Barker spent 16 years trying.

Think back, for a moment, to 1998. The Brewers limped to a 74-88 season at least partially because of the fact that their first basemen (John Jaha, Mark Loretta, Dave Nilsson and Bob Hamelin most notably) combined to hit just .242/.345/.399 on the season, coming in with the 14th best OPS in the NL. But hope was on the horizon.

That hope came in the form of 1996 third round pick Kevin Barker, who had been good enough in the minors to convince Bowman to make him a 1998 rookie card, #418 in that season's set: 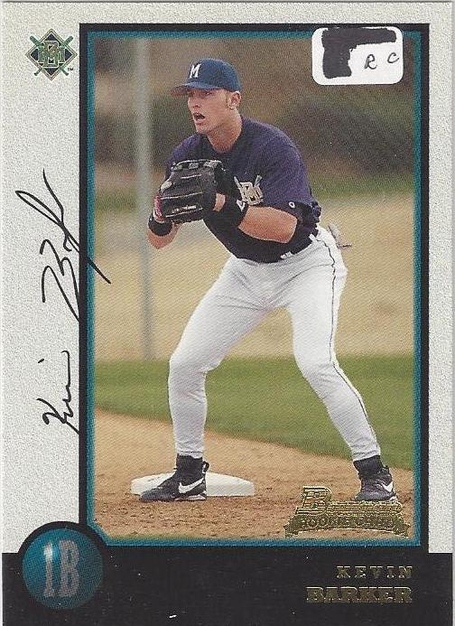 Despite having appeared in less than 150 major league games, Barker has had a long professional career: He's played over 1700 minor league games during his 16 seasons, including 2010 and 2011 in Mexico.

Today is also the third anniversary of a 2009 trade that sent J.J. Hardy to the Twins in exchange for Carlos Gomez and looks a little better each day lately. We covered that event in Today In Brewer History last year.