Aramis Ramirez continued his comeback from his rough start with a long drive to left against the Royals in June.

Brew Crew Blasts is a look at the ten longest home runs hit by Brewer batters during the 2012 season, as measured by Hit Tracker Online. The series starts will run once each weekday for two weeks. Here are the home runs we've already covered:

We've spent a lot of time discussing Aramis Ramirez's slow start to the 2012 season, but by June 14 he had already turned it around. Entering play on that day he had 22 hits in a span of 17 games to raise his 2012 OPS from .656 to .772, and he raised it again when he reached out to hit this blast against Royals pitcher Luke Hochevar:

That ball traveled 440 feet, and was the second longest homer hit by a Brewer on the road this season. Hit Tracker says it was the slowest home run in our top ten (traveling 107.7 mph off the bat), but also the highest with a 27.4 degree elevation angle. For comparison purposes, the Carlos Gomez blast we featured yesterday had a 21.7 degree elevation angle.

Ramirez hit this drive on the first pitch of the at bat, an 89 mph cutter with less-than-perfect location: 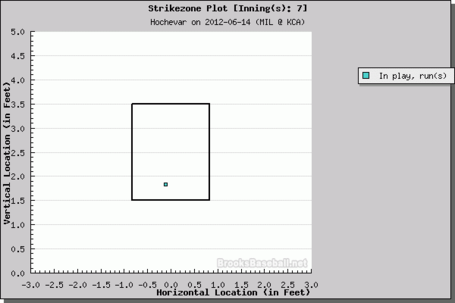 This wasn't even the longest home run Luke Hochevar allowed in 2012, which might be part of the reason the Royals were in the market for pitching this winter.

This was Ramirez's second longest home run of the 2012 season. We'll have a look at the longest next week.