Rickie Weeks is going to be a regular on this list.

Rickie Weeks had a down year in 2012, posting a career-low .328 OBP and near-worst .400 slugging percentage. Despite those numbers, though, Weeks managed to connect for 20 home runs for the third consecutive season and closed out the year with a mammoth blast.

Weeks' final home run and second-to-last hit of the season came against Clayton Richard and the Padres on October 1. The Brewers were leading 2-1 with Norichika Aoki on second in the fifth inning when Weeks came up and hit this bomb:

That ball traveled 441 feet and was clocked at 111.2 mph off the bat, making it the eighth fastest and eighth longest Brewer home run of 2012. It was also hit at a 21.4 degree vertical angle, making it the lowest homer in our top ten.

Of course, Clayton Richard deserves some credit here too: He served Weeks a 93 mph fastball that could serve as the definition of "middle-middle:" 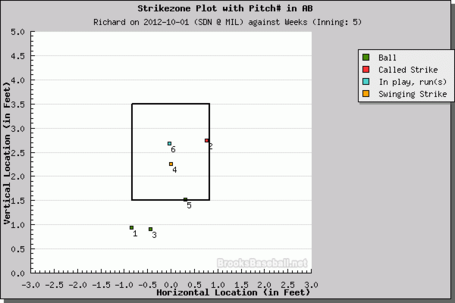 This was only Weeks' third longest home run of 2012. It was the fifth longest allowed by a Padre all season, and the second longest given up by Richard.