On Monday we talked about a long Gomez homer against the Nationals in July. About a month earlier, though, he hit another ball even further.

Admittedly, like Gomez's other homer on this list, this one didn't mean much. The Brewers were up 9-0 in the sixth inning against the Diamondbacks on June 30 when Gomez crushed this Craig Breslow offering:

If that video isn't working for you, click here to watch it at MLB.com.

Gomez did a great job getting a pitch to hit in that at bat. The pitch he hit was the seventh pitch of the plate appearance, a 93 mph fastball up and over the middle. 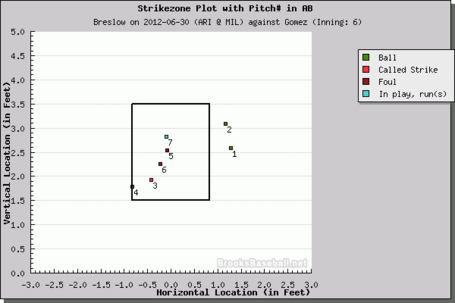 That ball traveled 442 feet and was both Gomez's longest home run of the 2012 season and his major league career. It was the second longest home run allowed on the road by a Diamonbacks pitcher this season, and the longest not hit at Coors Field.