Brew Crew Blasts #6: Weeks Puts One On The Board

Rickie Weeks is the first player on our list of 2012's longest home runs to drive one off the scoreboard in center at Miller Park.

Share All sharing options for: Brew Crew Blasts #6: Weeks Puts One On The Board

If you just looked at the finished version of the above list, you'd never know Rickie Weeks had a down year.

The Brewers were up 5-3 in the seventh inning of a July 29 contest against the Nationals when Rickie Weeks came up with a man on and no one out and hit this blast to left center off Ryan Mattheus:

That ball went an estimated 443 feet and was traveling 108.9 mph when it left Weeks' bat.

As is usually the case when a ball is hit this far, the pitcher played a key role. Weeks' blast came on the sixth pitch of the at bat, a 94 mph fastball within an inch or two of the exact center of the strike zone: 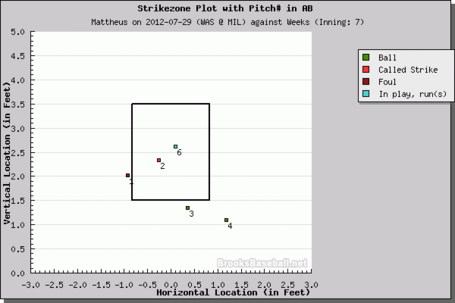 This was only the second longest home run Weeks hit in 2012. It was the fourth longest homer allowed by a Nationals pitcher, one spot ahead of the Gomez shot we mentioned on Monday.