Brew Crew Blasts #5: Braun On (And Off) The Board

Ryan Braun's first appearance on this list was a big one.

Share All sharing options for: Brew Crew Blasts #5: Braun On (And Off) The Board

rew Crew Blasts is a look at the ten longest home runs hit by Brewer batters during the 2012 season, as measured by Hit Tracker Online. This is the second week for the daily series, and here are the home runs we've already covered:

Ryan Braun led the National League with 41 home runs in 2012 despite giving the league's other sluggers a bit of a head start. When the Brewers hosted the Rockies on April 21 Braun was only hitting .245/.316/.388 through 13 games with just one home run over 57 plate appearances.

Braun still had some power in his bat, though, as shown by this sixth inning, game-tying blast against Esmil Rogers:

That ball traveled 448 feet to center field, making it Braun's longest home run of the season at home and the fifth longest ball hit at Miller Park in 2012. It also started something of a hot streak for Braun, who hit .365/.403/.889 with nine homers over his next 16 games.

What makes this home run even more impressive is the fact that it was hit on a pretty good pitch. Despite having fallen behind 2-0 in the count, Rogers threw Braun a fastball at about 96 mph right on the inside corner: 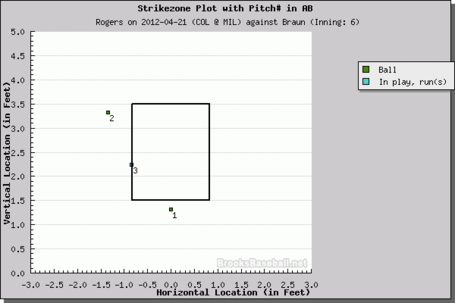 This blast was the 16th longest allowed by a Rockies pitcher in 2012, but only the second longest hit away from Coors Field.