Corey Hart and the Brewers started the day with a bang on May 20.

There's nothing quite like a leadoff home run to set the tone for a good day.

The Brewers fell behind 1-0 in the top of the first against the Twins on May 20, but Corey Hart led off the bottom of the inning and tied the score with this massive blast off longtime friend of the team Jason Marquis:

That blast traveled 449 feet to left, and was the eleventh longest first inning home run in all of baseball in 2012. It's the longest home run Hart has hit since Hit Tracker started keeping track of such things in 2006, and the third longest home run a Twins pitcher allowed this season. 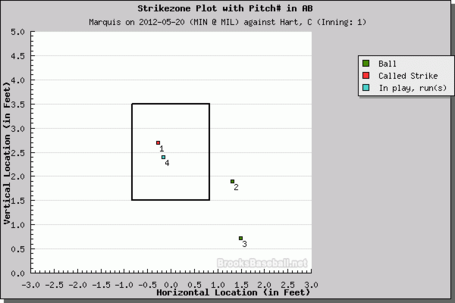 Hart's performance in this game was actually overshadowed a bit by Jonathan Lucroy, who had two home runs (including a grand slam) and tied the Brewer franchise record with seven RBI in their 16-4 win.