It doesn't happen often, but sometimes the sequel is better than the original.

In the fourth inning of a September 16 game against the Mets Ryan Braun gave the Brewers a 1-0 lead with a 421-foot solo homer off Chris Young. Aramis Ramirez, not to be outdone, followed him to the plate and hit this tape measure shot:

As it turns out, Ramirez supplied most of the power on this one. The pitch he hit out was an 85 mph fastball, although it was put in near-perfect location: 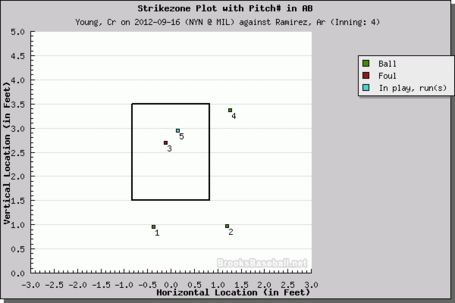 As it turns out Braun had the last laugh on this day, hitting another homer in his next at bat. Three solo homers were all the Brewers needed as they completed a 3-0 win.