On August 30 Ryan Braun hit a ball about as far as you can hit it without leaving Wrigley Field.

The Brewers' August 30 game against the Cubs didn't end well, but at least it gave us this fun highlight.

The Brewers scored five in the third inning of this game to take a 5-3 lead, then plated two more in the fourth on this Ryan Braun moon shot:

That ball traveled 460 feet and was both the longest home run hit on the road by a Brewer in 2012 and the longest of 152 home runs hit at Wrigley Field. When you look at the Hit Tracker map it's pretty easy to pick out, all by itself behind the center field bleachers.

That home run came on one of Brooks Raley's final pitches of the 2012 season, and it's pretty easy to tell why. It was an 89 mph meatball within an inch at most of the exact center of the strike zone: 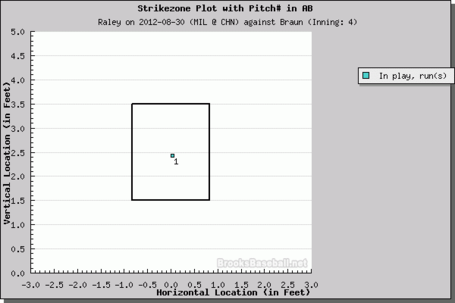 Unfortunately for the Brewers the fun ended shortly after this. Livan Hernandez, Manny Parra and Francisco Rodriguez combined to allow nine runs on eight hits and five walks over just two innings as the Cubs came back for a 12-11 walkoff win.