The longest home run hit by a Brewer in 2012 came off the bat of Rickie Weeks against the Cardinals on July 17.

In the end, of course it had to be Rickie Weeks. The Brewers have lots of home run hitters, but no one who can match his pure power.

Weeks put that power on display against Joe Kelly and the Cardinals on July 17, interrupting an interview with this solo blast:

If that video doesn't work for you, click here to see it at MLB.com

That ball traveled 462 feet to left center and was traveling 111.5 mph when it left Weeks' bat. It was the longest non-Prince Fielder homer at Miller Park since 2009, when Adam Dunn hit a ball 473 feet against Carlos Villanueva. This was the third time since 2009 Weeks has hit a ball exactly 462 feet, with one of the others coming against new teammate Burke Badenhop in three years ago.

Joe Kelly threw Weeks four pitches in this at bat, and they were all fastballs between 93-94 mph. Weeks homered on the fourth pitch after likely missing an opportunity to do so on the pitch before: 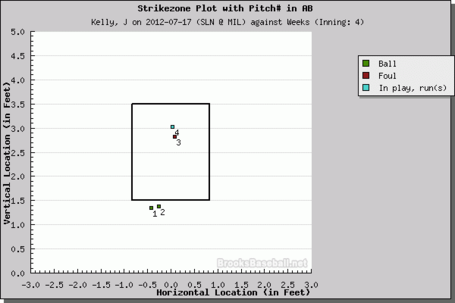 Weeks had three of the Brewers' ten longest home runs in 2012. He also had two on the list last year and two of the top three in 2010.