Norichika Aoki hit ten home runs in 2012. Let's talk about that a little.

Brew Crew Blasts is a look at the ten longest home runs hit by Brewer batters during the 2012 season, as measured by Hit Tracker Online, and some other home run-related tidbits that caught my attention. This is the third week for the daily series, and here are the home runs we've already covered:

When the Brewers signed Norichika Aoki last winter, there was a wide variety of expectations regarding his ability to perform in the majors. I don't think anyone would have predicted, though, that Aoki would finish the season with ten home runs. He only hit four in 2011 in Japan after the Pacific League's ball was deadened a bit.

Consider this fact for a moment: 188 major leaguers hit at least ten home runs in 2012. Jon Roegele of Beyond the Box Score notes, though, that Aoki is the only one among them who didn't hit at least one ball 400 feet. Aoki's longest 2012 homer was this shot, which fell 26 feet short of that mark:

All nine of Aoki's outside-the-park shots landed near the exact same location, somewhere between straightaway right and the foul pole. Check out this grouping, via Hit Tracker: 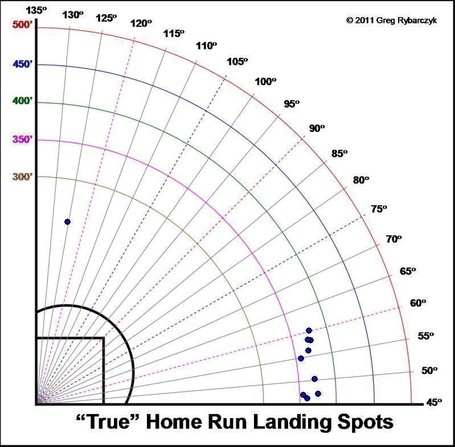 It's worth noting, though, that most of those homers weren't cheap. Hit Tracker estimates that all nine of those balls hit over the fence would have gone out in at least ten major league parks, and six of them would have reached the seats in 20 or more. This isn't just a guy getting lucky: It's a guy with significant power to a specific location.

Seeing all those homers in a similar location, though, got me wondering if perhaps they were hit on similar pitches. It turns out most of the pitches Aoki hit out this season have some common qualities:

Take away the Motte fastball and we've got a conclusion that makes sense: Aoki, like most major league hitters, can handle a upper 80's-low 90's pitch up in the zone and over the middle third of the plate. I'm not sure if that counts as breaking news, but I wonder if it will mean pitchers are less likely to challenge him with fastballs in 2013.

Of course, Aoki has some speed too. No conversation about his 2012 round trippers would be complete without a look at his first major league homer, an inside-the-park job against the Rockies on April 20.

That pitch was an 89 mph fastball down and outside.