I think this 1980's Brewer would be better remembered if he'd gone with his given name, Bertram Burris.

Righthander Ray Burris is probably best remembered for a very good run with the mid-70's Cubs. Between 1975-77 Burris pitched 708.1 innings with a 3.95 ERA for the north siders, winning 44 games for Cub teams who went a combined 23 games under .500 during those three years.

Those days were long past, though, and Burris had been a Cub, Yankee, Met, Expo and Athletic when the Brewers acquired him in the December 1984 trade that sent Don Sutton to Oakland. The 13-year veteran was still only 34 years old at the time of the swap.

Burris pitched in 29 games (28 starts) for the 1985 Crew and posted a 4.81 ERA. He walked just 2.8 batters per nine innings, which helped make up for the fact that he struck out just over four batters per nine and allowed 25 home runs in just 170.1 innings.

That performance was enough to earn Burris a 1986 Donruss card, although even he looks confused in #107: 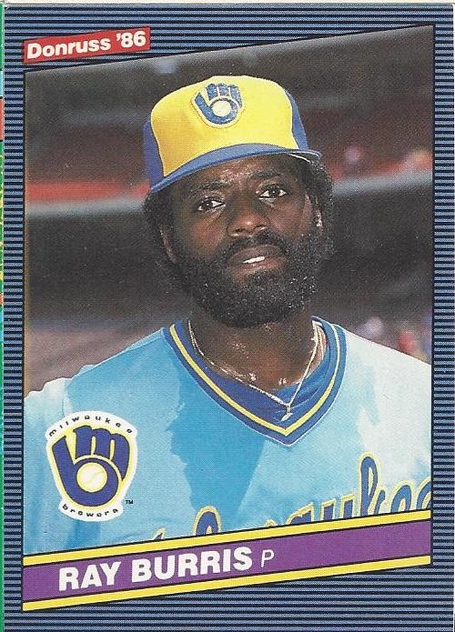 Unfortunately the joke was on Donruss, as the Brewers released Burris at the end of spring training in 1986. He caught on with the Cardinals and pitched in 23 games that season before returning to the Brewers for the final ten appearances of his career in 1987.

Burris spent the 2012 season as pitching coach for the AA Erie Seawolves in the Phillies organization, but has been promoted to AAA for 2013.

With help from the B-Ref Play Index, happy birthday today to 1976 Brewer Ray Sadecki. He turns 72.

Today is also the tenth anniversary of Ronnie Belliard signing with the Rockies as a free agent in 2002, closing the book on his Brewer career. We covered that event in Today in Brewer History last year.