EDITOR'S NOTE: A few weeks ago I was offered the opportunity to review OOTP '13, the latest iteration in one of the most in-depth baseball simulations ever created. This time of year my schedule is a little too tight to spend the volume of time it would take to really experience everything this game has to offer. Thankfully, friend of the site J.D, Fox of The D+ Sports Advantage is a veteran OOTP'er and penned this review. - KL

Another baseball season is upon us, and that means another year of baseball video games. While most gamers are working hard to pitch a perfect game in MLB 2K12's $1 Million Dollar Perfect Game Challenge, or enjoying the realistic animations and controls in MLB 12: The Show, the real diehard fans have been waiting for one game, OOTP '13.

If you read my review on Brew Crew Ball last year of OOTP '12, you are likely ahead of the game, and may have already purchased this year’s edition. If not, we'll start with the basics. Out of the Park Baseball 2013 is a baseball simulator produced by a German company called Out of the Park Developments. The key word is simulator; if you are looking for a game with graphic animations where you control every player’s precise movements, from pitching, to hitting, to base running, this is likely not the game for you. But what the game does have will amaze you. Depending on how you choose to play the game, you can be a general manager, a manager, or both simultaneously. While you may be saying to yourself "but I can do that in (insert name of console video game here) '12," which is true, you cannot come close to the level of detail that this game provides.

If you play as the general manager, you can control every portion of your franchise, from both a financial standpoint and on-the-field as well. You can hire and fire coaches and scouting directors, down to your pitching, hitting and bench coaches in your lowest level of minor league baseball. The tendencies of these coaches, along with the franchise strategies you set forth, help shape the prospects in your system from their infancy to their eventual call up to the big leagues. This can take one of two forms, as you can be realistic and work on developing stamina and more pitches for a young arm like Taylor Jungmann, or you live in a fantasy world and forget about his pitching and try to develop him into a defensive minded outfielder with a strong arm. If you choose to take on the managerial role as well, you have the option to control the day-to-day lineups of every team in your organization, the pitching rotations and tendencies of each team. If not, you can rely on the individual managers for each club in your system, who come with their own set of tendencies that you can review before hiring or firing them.

As was the case in last year's game when the system was completely overhauled, the player development system, and more importantly the budget you set for it, is a huge component for the long-term player of the game. If you decide to sign a bunch of high dollar free agents, depending on the money you have laying around, it might take a toll on your development budget. I like to think of this feature in terms of the movie Major League, as you cut the development budget, things like transportation and post-game treatment get cut further and further, most likely to comedic levels. This is not good for any young farmhand. We mention the "long-term" player of the game, meaning someone who plays out the franchise over multiple seasons, but that is just one way to start out the game.

One, of course, could play this game as the 2012 Brewers, as OOTP '13 comes with opening day Major League rosters, that have been in fact, tweaked twice from the time of the game's release until now. But there are other ways to play, for those who enjoy historical settings, and also those brave souls who have a vision for a fantasy league in Brazil. Historical leagues allow you to replay any season from 1871 to the present, taking control of a beloved franchise from a down or up period in their existence and trying to begin or extend a reign of terror on the rest of your opponents. Want to play in the dead-ball era, but make the ball act like you are playing every game in Coors Field pre-humidor? This game allows you to adjust the statistical outputs so that you can make that a reality. Do you want to make up your own fictional baseball universe with teams all over the globe? The fictional league mode of the game has a great depth as you uncover players from all over the globe. Whether you make a 10 team league in Wisconsin or a 50 team league worldwide with 8 levels of minor leagues, the world adjusts to whatever you create. You can then decide on things such as "do I like having the amateur draft in June?" and "when/if to have a Rule 5 draft."

All of the features that people come to love and expect from the OOTP franchise are here for another season. Fans can painstakingly (at least for me) play out every pitch of every game in a 162 game season, only play out one pitch in an at-bat (where you choose a strategy for the at bat and only see the result of the final pitch of the AB), or simulate 10-15-30 or more games at time, while choosing what events will stop the simulation. The choices are yours and yours alone in this series, but the depth of them shows why game developer and ESPN analyst Curt Schilling is not only a long time player of the game, but also its biggest fan (he not only tweets out items about the game, he participates in the message boards and helps fans tweak settings to accomplish desired real world results).

New features definitely made the cut to increase the depth and control of the game, but the key to me for OOTP '13 is the improvements to existing features make this game. The first thing I have to say off the bat is that the minor tweaks they have made to the interface not only help the games visual appeal, but everything seems to move a lot faster than in previous games. The offseason changes to the collective bargaining agreement are at the forefront, as all of the new free agent, salary arbitration and draft rules are all included in the game. Also included is the dreaded second wild card team, as well as Houston's upcoming move to the AL West in 2013. Another game play mode was added called Real Time Simulation, which allows for you to look over news and league transactions while the day simulates in the background at whatever speed you set. If your team is in a tight game and you want to take over playing the game mid-session, this is the mode for you.

One major new feature that has been added needs a little bit of tweaking in my eyes, but as there are a lot of updates made to this game over the course of the season, it could definitely improve. The games Interactive Storylines feature is a great concept, as the goal of the feature according to the release notes is as follows "OOTP 13 takes the storylines introduced by OOTP 12 to the next level with a layer of interactivity that brings you even closer to the general manager's office." While this sounds like a good thing for the improvement of the game, it is a feature I currently have off. While there was already a morale system for players in the game (which can be effected by personal slumps, team slumps, playing time, etc.) this mode attempts to add one more level to it, with the addition of the ability to fine, suspend and release players based on such events as comments made to the media, and locker room disagreements with teammates. I am all for this, but I have seen two players so far make "trade me or I'll retire" threats under the age of 30, who actually go on to retire. It sounds, however, that an update will be coming very soon to make some updates to the mode, which I as a player would definitely look forward to.

Down to brass tax, and what those of you here on the site are waiting for if you have made it this far into the article. How will the Brewers do this season? I have attached a stats page to show, but there is one thing it doesn't show, how far they made it in the playoffs. My first game on the current build of the game (released April 12th) has the Brewers losing 4-2 in the World Series, despite a couple of major season ending injuries (which I will not put in print for karma purposes, you'll have to see the screen shot). 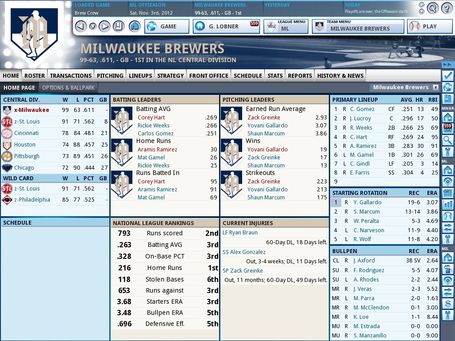 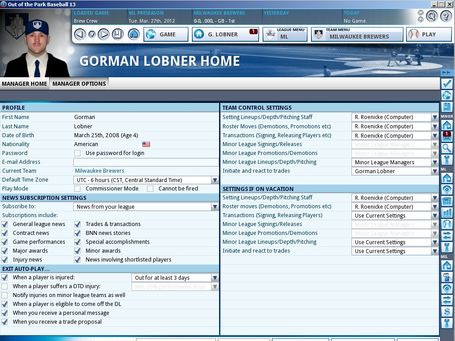