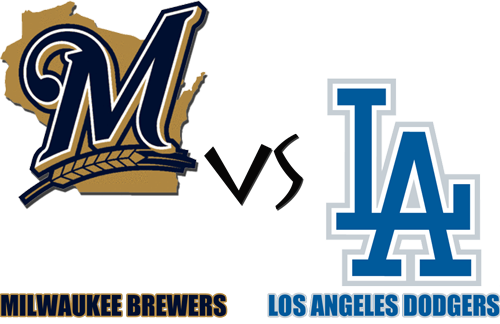 As the Brewers and Dodgers get ready to open their series at Miller Park tonight, Eric Stephen of True Blue LA agreed to answer a few questions about the NL West-leading Dodgers, the hottest team in baseball.

BCB: The Dodgers will enter play Tuesday night with the best record in baseball at 9-1, and winners of six straight. Is there a single reason for this hot start? Has anything gone wrong to this point?

ES: If I had to pick just one reason for the Dodgers' hot start, it would have to be Matt Kemp. He is hitting .487 and his numbers are so ridiculous that on Sunday he hit a single in the sixth inning that caused his slugging percentage to go down. He is picking up where he left off last season. He is averaging an RBI per game and more than a run per game over his last 58 games, and he is hitting over .400 (.405/.445/.836) over his last 29 games.

ES: I never want to say Kemp can't do anything - I joked on Sunday that when he predicted 50/50 he meant homers and homers - but that 50/50 number was just a nice quote during spring training. Kemp himself has admitted that the goal is outlandish but he has kind of had fun with it too, saying that he always wants to set hard-to-attain goals.

BCB: I already mentioned Kemp's six home runs, but he and Andre Ethier combine for nine of the Dodgers' ten long balls this season. Is this how it's going to have to be all year, or are there others that could step up and contribute more?

ES: Andre Ethier is finally fully healthy again, really for the first time since the beginning of 2010. He broke his pinkie in May 2010, then battled an ankle injury, followed by a knee injury last season that sapped his power (11 home runs after 54 the previous two years) and eventually required surgery in September. Having Kemp and Ethier healthy and productive together at the same gives the Dodgers a dynamic they didn't have last year. But ultimately they will need James Loney, Juan Rivera, and Juan Uribe to also hit for them to make the playoffs.

BCB: Aaron Harang hadn't struck out ten batters in a game since 2009, but then struck out nine Padres in a row en route to 13 on Friday. What happened?

ES: I likened Harang's strikeout barrage on Friday to Kent Mercker's no-hitter against the Dodgers in 1994, a completely unexpected performance. Baseball is amazing like that when something historical happens seemingly out of nowhere (Harang was one strikeout shy of Tom Seaver's MLB record of 10 consecutive Ks, and he broke Johnny Podres' 50-year old club record of eight straight). Going forward, I expect Harang to find a middle ground between his first start (13 baserunners and 13 outs) and his second start (13 strikeouts), but that Friday game sure was fun.

BCB: It's obviously early, but the Dodgers entered Monday two and a half games up on the field in the NL West. What do they need to do to win this division?

ES: To win the division, the Dodgers need Kemp and Ethier to continue to rake but also get some semblance of production out of Loney, Rivera, and Uribe, as that latter trio has combined to hit .239/.303/.273 so far with no home runs in 100 plate appearances. The Dodgers need to pray their starting pitchers stay healthy. With Rubby De La Rosa on the shelf until August or so as he recovers from Tommy John surgery, their most reliable backup option for a starter is 22-year old Nathan Eovaldi, who has a great arm but all of 35 major league innings under his belt. After Eovaldi, the pitching depth chart is razor thin.

Thanks to Eric for taking the time, and check out more of his work at True Blue LA.